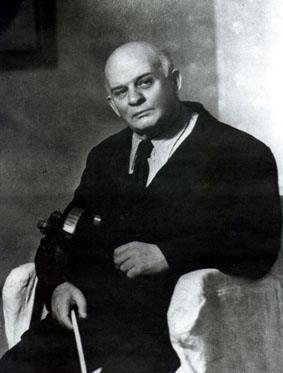 Abram Ilyich Yampolsky (1890-1956) was one of the greatest pedagogues of the 20th century. He studied in St Petersburg with Sergei Korguev, a Pupil of Leopold Auer. Having graduated from there with the Great Silver Medal in 1913 he taught at the Moscow Conservatory from 1923.

At the end of his edition of the Kreutzer studies Yampolsky gives a few 'virtuoso variations': his own extremely difficult studies based on Kreutzer's originals. The study in E major - based on no.8 - is arguably the best study for arpeggios ever written (see PDFs below).

Secondly, if we do use the fourth finger in these positions we must turn the hand towards the G string so much that the first three fingers cannot properly press on the string any more, but push it from the side. The gain of one finger (fourth) jeopardises the security and quality of the tone of the other three. An excellent example can be found in the first four bars of the study.

I have used a bracket sign to connect the notes played with the same finger. These notes form an axis around which other fingers move. The player may use it as a physical aide - with the finger actually left on the string - or a mental help only.

Nearly all the bars consist of two groups of nine notes, which can be broken down into different groupings; for example, one note followed by two groups of four notes. Separate out these different groupings, either within the original bowing or with the bow copying the pattern. Other possible combinations are 4 + 4 + 1, 4 + 1 + 4, 3 + 2 + 2 + 2 and 2 + 2 + 2 + 3. Practising like this improves coordination, security and precision.

When performing the study it is best to use legato in the top half of the bow. Bow length and position along the bow should be varied according to personal technical and tonal preferences and the desired dynamics.

To achieve clarity all the elements of good legato playing in brilliant passages must be observed and perfected: clean change of position, firm finger fall when going upwards, a slight half-pizzicato when going downwards, and articulation with the bow when changing strings. In Galamian's words: 'Legato string crossings [should] match in sound the percussion of the left-hand fingers.' This can be considerably helped by practising portato and staccato variations, which also improves general control.

When learning and performing this study it is useful to remember the words of Heifetz: 'I do not play as fast as some violinists, but I do play clearly and evenly.'