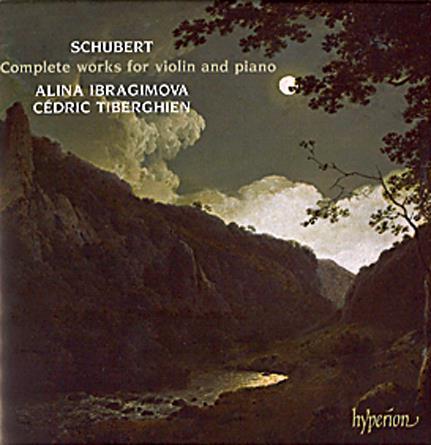 Composed in one hectic year when Schubert was 19, the first three violin sonatas were in a style inherited from Mozart, and were described as ‘sonatinas’ when first published after his death. Alina Ibragimova uses that description as the starting point for her performance of the D major Sonata, which combines elegance and playfulness in equal proportions. Often content simply to decorate Cédric Tiberghien’s proactive keyboard role in the first two movements, she takes on a more equal function when they reach the joyful finale.

Schubert was to bring more weight and drama to the outer movements of the following two sonatas, and the duo allows modest rhythmic latitude in performances that are otherwise strict in their adherence to the printed score. At times I find Ibragimova’s pianissimo passages are a little too slender in tonal content, but elsewhere her playing is adorned with an unassuming beauty.

Only a year had elapsed before the completion of the A major Sonata, but now Schubert’s violin writing was far more challenging, and Ibragimova responds with a display of her remarkable technique as she musically dances through the outer movements.

That outgoing approach continues into the following two display pieces, the Rondo and Fantasy, the disc ending with a transcription of the song Sei mir gegrüsst!, which provided the theme for the variations section of the Fantasy’s elaborate third movement. Tiberghien’s playing is generous throughout, and the recording is of exemplary quality.