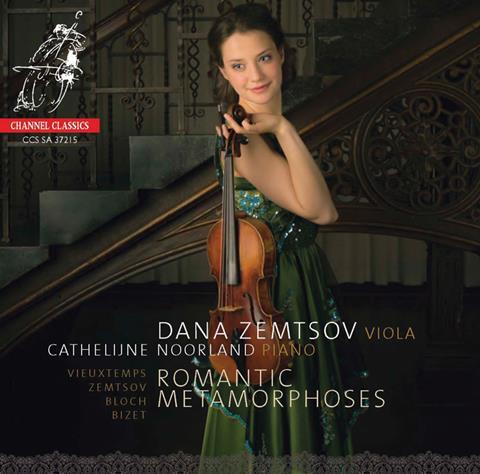 Third generation in a family of viola players, Dana Zemtsov is a talent to be reckoned with. In this well-planned recording she presents a satisfyingly rounded recital. The most important of several viola works written by violin virtuoso Henry Vieuxtemps, the potentially rambling B flat major Sonata comes across in her hands as a well-structured, musically weighty composition. Bloch’s Suite from 1919, the piece that famously pipped Rebecca Clarke’s Sonata to the post in the first Coolidge competition, is another potentially unwieldy composition but it receives a powerful performance that is well aware of the work’s descriptive elements (it depicts nothing less than the creation of the world).

Evgeniy Zemtsov’s Melody in the Olden Style is central to the family lore, having been written by the present player’s grandfather for his future wife. Its soulful tunes are put across by the composer’s granddaughter with heartfelt sincerity. With Waxman’s Carmen Fantasy, Zemtsov pays homage to her teacher, the great virtuoso Michael Kugel, whose signature piece it is. Every inch of the way, Zemtsov matches the older player’s panache in this bravura warhorse. The vivid SACD recording catches every nuance in Zemtsov’s technically immaculate and consistently imaginative playing, and she is ideally partnered by Cathelijne Noorland in this attractive, most collectable recital.