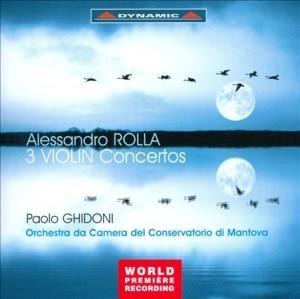 Alessandro Rolla (1757–1841) is best known as the teacher of Paganini and originator of some of his technical effects. Accordingly, these concertos hint at the opening-up of violin virtuosity in the late 18th century and are well-crafted compositions balancing an operatic Classical style with a proto-bravura sensibility. They are cleanly and strongly executed by Paolo Ghidoni, an alumnus of the Mantua Conservatoire and former student of Salvatore Accardo.

The B flat major Concerto gets things off to a good start with some very tidy orchestral playing, although it seems rather too closely recorded. Individual players can be heard at times, and the sound is a little too brassy – something that can disfigure Ghidoni’s otherwise admirably animated playing (especially on the E string). However, Ghidoni’s playing itself seems out of place stylistically: whereas the orchestra suggests some compliance with the historically informed performance agenda, Ghidoni is typically mainstream – percussive staccatos, somewhat strident tone and (as is especially evident in the middle movement of the D major Concerto) with some thick G-string vibrato.

The playing across the three works is at least consistent, as are the style and quality of the compositions themselves.