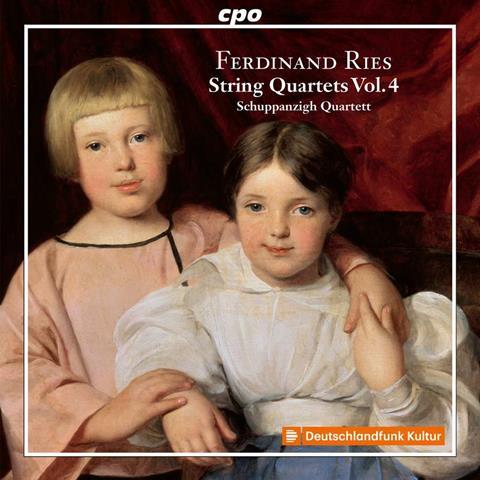 ‘He imitates me too much’ is alleged to have been Beethoven’s cantankerous verdict on his erstwhile student and on-off friend, secretary and copyist Ferdinand Ries (1784–1838). Well, up to a point. The younger man clearly learnt from him how to exploit harmony to drive a musical argument, as well as a smart line in rhythmic energy – the way, for example, the uneasy Scherzo of the A minor Quartet (c.1826) is propelled along by accented off-beats. Ries is also more inclined to relax into a long-breathed melody than to hammer away at motivic cells, and his tunes have a greater degree of memorability than is often the case in similar second-tier composers.

The C major String Quintet was composed for this ensemble’s 19th-century namesake, and accordingly the lead violin line carries much of the virtuoso interest, which occasionally taxes Ignaz Schuppanzigh’s 21st-century counterpart at extremes of range or tempo. Mozart’s quintet in the same key (K515) is a clear influence on this 1809 work, with the extra viola, here as there, gloriously enriching the mid-range and offering enhanced opportunities for subgroupings of three or four players. It’s the finer work of the two, and the longer, with a particularly hefty finale whose initially rustic demeanour gives way to a finely wrought and, yes, Beethovenian argument of 13-and-a-half minutes that compels the attention throughout. Despite occasional lapses of intonation and ensemble, this naturalistically recorded fourth instalment in the Schuppanzigh Quartet’s slow-burn survey (instigated in 2004) offers an appealing cross-section of Ries’s chamber output.