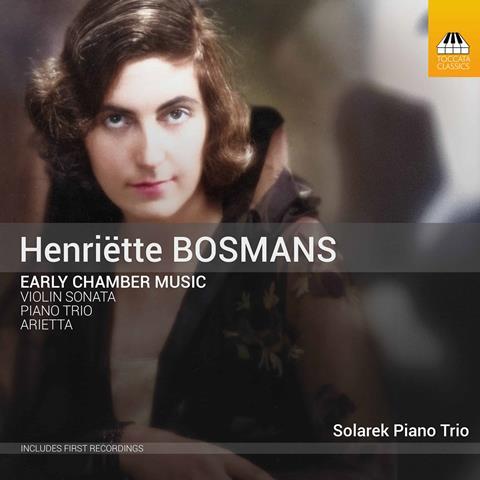 These are first recordings of early works by the Dutch composer Henriëtte Bosmans (1895–1952), written in a rich late-Romantic style. The 1918 Sonata opens with a full-blooded fervent theme, thrusting forward on a wave of dodgy intonation. It quickly calms down into something melancholy and thoughtful, with Solarek maintaining a quiet, passionate intensity. A dry, pecked theme opens the Non troppo presto second movement, gnomic and restless. The languid, angular Adagio flows into the wistful fugal opening of the Moderato assai finale, which remains largely contemplative before rising to a degree of grandeur at its conclusion.

After the short reflective melody of the Arietta, they are joined by cellist Miriam Lowbury for Bosmans’s Piano Trio of 1921, which has wide-ranging conversations between violin and often high cello following its turbulent opening. Lowbury neatly crafts the opening melody of the central Andante, which has at its centre a little scherzo with plenty for Bottrill to do. The last movement opens with a slow, meandering soliloquy from Solarek before bursting out into energetic jollity. These pieces are certainly worth an outing, and the artists do many good things musically, but this recording is let down by Solarek’s constantly uncertain intonation. The recorded sound is clear and balanced.