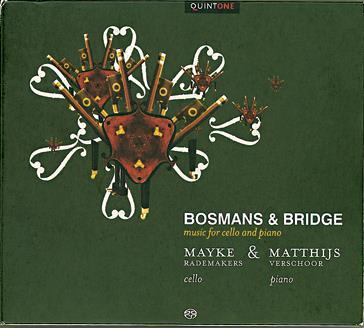 For their second disc together, Dutch duo Mayke Rademakers and Matthijs Verschoor pair sonatas by contemporaries Frank Bridge and Henriëtte Bosmans, the latter a well-known figure in her native Holland where a composition prize is named after her.
Rademakers, a student of Navarra, Pleeth and Starker, plays with an extrovert style well suited to the declamatory opening of Bosman’s early sonata of 1919, its cello line sustained with impressive force over widely spaced, pounding piano chords. The writing is confident and wide-ranging in expression, dynamics and tessitura, and its delivery is similarly stylish. Attention to finer detail is sometimes lacking – better control in the Adagio could have eliminated the odd bulge in the line, and the opening of the mystical seven-minute Nuit calme is marred by a wavery vibrato that gets in the way of tone production.

Bridge’s wartime sonata, completed just two years before Bosmans’s, boasts a relaxed treatment of rubato by the duo and a beautifully accomplished fall from the climax before the return of the first movement’s initial theme. The powerful G-string tone of Rademakers’s instrument, by German cello and bass maker Stefan Krattenmacher, aided by a wide vibrato, enables her to relish the first movement’s rich, undulating lines, though her shifts are sometimes too audible in the boomy acoustic of this slightly rough-edged recording. Bridge’s despair at contemporary events is most evident in the Adagio, which Verschoor introduces with a deeply felt passage, to which the cello can only comment in fragmented lines. The broad, pleading melody in the cello as the finale gathers in intensity is powerfully executed.