Tim Homfray watches the recital at the Voces8 Centre (St Anne and St Agnes Church) in London, UK, on 17 July 2021 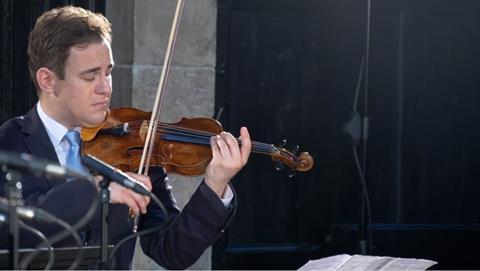 Against the odds, the vocal group Voces8 put together its Summer Music Festival for 2021. This concert was based around a performance of Messiaen’s Quartet for the End of Time, but Voces8 likes to take part in all the concerts, so this one started with Paul Drayton’s arrangement of Vaughan Williams’s The Lark Ascending for violin and voices. The choir seemed more of an equal partner than the orchestra normally does, particularly in the central Allegro tranquillo section, where they sang the words of the George Meredith poem that inspired the composer, as Jack Liebeck (above) swooped and dived around them, playing with limpid simplicity and fluid expression before rising away into the resonant church acoustic.

Messiaen’s Quartet had great clarity of texture and balance. In the first movement, cellist Sheku Kanneh-Mason’s harmonic glissandos peeped through the free-sounding bird calls and roulades of Liebeck and Bliss. In the Vocalise Liebeck and Kanneh-Mason gave the first of many demonstrations of superb bow control during their ghostly progression in octaves, mostly without vibrato. Both the Louange movements, one for cello and piano, the other for violin and piano, were timeless, long-breathed meditations. Bliss gave a mesmerising account of the solo-clarinet movement Abîme des oiseaux, and all four players rose to the primal demands of Messiaen’s ‘extatique’ in the penultimate movement, as the angel announces the end of time.