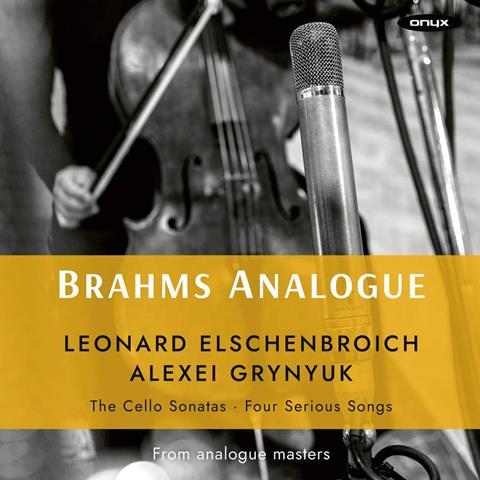 Rarely is a CD marketed, as this one is, on the basis of its recording process. At Leonard Elschenbroich’s request, tape recorders and 1960s microphones replace the digital technology that has eclipsed analogue sound in the past half-century.

Elschenbroich makes his case in the booklet – for him this is not some retro blast from the past but simply ‘the best reproduction of our music’. Conditioned as I am to the clarity of digital sound, I was captivated by the recording’s warmth – fuzzier around the edges but more human, with an authentic-sounding timbre to the lower strings. In a personal interpretation of the E minor Sonata, Elschenbroich resists the temptation to play out in the opening, taking Brahms’s piano indication literally in a gentle and subdued exposition.

Video: ‘I can hear it when you smile’ - cellist Leonard Elschenbroich on facial expressions

Read: Leonard Elschenbroich steps in to save BBC Proms premiere

His Menuetto has a sweet, hesitant quality, with the staccato notes lovingly placed, contrasting with the hard, incisive sound Elschenbroich draws from his 1693 Gofriller cello’s strings in the Allegro. In the F major Sonata, the extraordinary cross-string tremolo sounds other-worldly – more like natural reverberations than composed music. The players’ attention to Brahms’ dynamics and articulation markings create occasional moments of revelation.

The gloomy, hollow sound of piano and cello in bare octaves in the death-infused Four Serious Songs is happily dispelled in the vibrato-infused warmth of the final song.