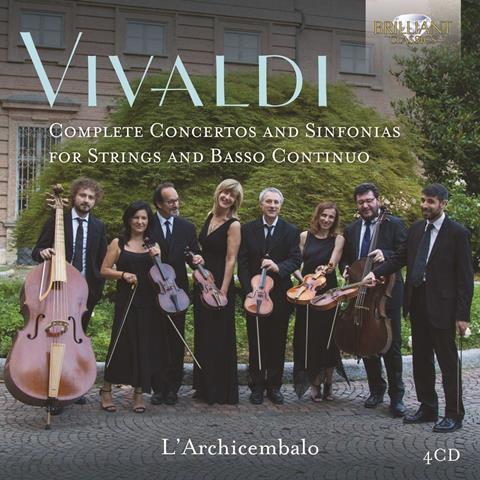 Description: There’s inventive and compelling playing in this bumper issue of Vivaldi

These recordings, captured in 2015 and 2018, embrace 51 complete works and offer some four and a half hours of diversion. That one can emerge fresh from the listening experience and crave more says much for L’Archicembalo’s compelling performances and Vivaldi’s indefatigable imagination, and gives the lie to the old chestnut that the Italian composer wrote one and the same concerto ad nauseam.

L’Archicembalo’s period-instrument accounts are technically accomplished, alert and stylish, and its minimalist forces realise with commendable taste these works’ wide-ranging characters and moods. Tempos are mostly well chosen and textures are suitably varied. For example, harpsichordist Daniela Demicheli is either dispensed with altogether in some slow movements (notably in RV129, 134) or employed to progress an otherwise static chord sequence (as in RV115, 121, 130, 138 and 142). Other slow movements focus on a solo violin, whether serving as a quasi-improvisatory ornamental link in sustained chordal passages (RV110), assuming a more melodic role (RV140, 155, 159, 165 and 167), or duetting with the harpsichord (RV145).

Excellent balance and clarity of articulation are shown in the surprisingly numerous movements, fast and slow, that are built on fugato ‘expositions’ (notably the opening movements of RV119 and 134 and the finale of RV133). The chaconne comes to prominence in RV114 and 157 and dance idioms commonly characterise the finales. Novelties include the humorous ‘Conca’ RV163, in which there are thematic affinities between the movements, and the folk-influenced ‘Alla Rustica’ RV151. The recording has a pleasing mix of clarity, realism and bloom.