A fresh take on an evergreen set of concertos 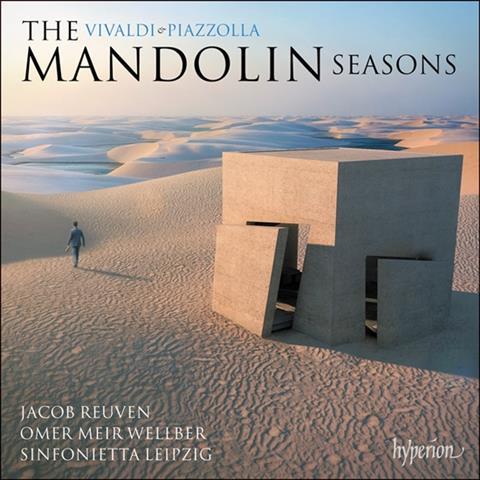 Description: A fresh take on an evergreen set of concertos

This ‘Four Seasons’ coupling offers fresh and exotic perspectives on Vivaldi and Piazzolla’s concertos, replacing the solo violin with the contrasting techniques and timbres of the mandolin and/or accordion. Jacob Reuven demonstrates his dexterity on the former, especially in ‘Autumn in Buenos Aires’ and the opening Allegro of ‘Spring’, but occasionally experiences hand coordination issues in some challenging passagework during these live recordings. Omer Meir Wellber multitasks exuberantly, directing the ensemble, contributing some inventive Vivaldian harpsichord continuo, playing a melodic role as accordionist in sections of Vivaldi’s works less suited to the mandolin and bringing an echt, bandoneon-like timbre to Piazzolla’s seductive, exuberant sound world.

Regrettably, the limitations of mandolin technique sometimes affect tempo considerations, most notably in the somewhat laboured first movement of ‘Winter’, finale of ‘Summer’ and in ‘Spring in Buenos Aires’; it’s a pity, too, that the soloists don’t clothe with additional ornamentation the naked melodies of, for example, the Largos of ‘Winter’ and ‘Spring’ and the Adagio sections of ‘Summer’. Cellist Moritz Klauk plays a significant solo role in Piazzolla’s ‘Autumn’ and Winter’ concertos, and the string ensemble (drawn from the Leipzig Gewandhausorchester) contributes a kaleidoscope of colourful effects, all captured in close, clear recorded sound.