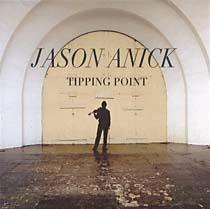 A respected player on the US jazz and fiddle scene, American violinist and mandolin player Jason Anick is based in Boston. He teaches at Berklee College of Music, the string department of which produces many of the country’s finest jazz and folk players. Tipping Point is Anick’s second album as a bandleader, for which he brings together a revolving set of players in acoustic quartet and quintet combinations. Stylistically, the disc moves between elegant swing and straight-ahead bop but never loses its melodic core.

The tone throughout Tipping Point is unfussy: instrumentally sharp and quietly cool. Anick’s own pieces, which make up about half the album, feature choppy rhythms and pert melodies with plenty of space for improvisation, which Anick shares out between his players. His chosen standards tend more towards ballads, such as Django Reinhardt’s ‘Minor Blues’, into which Anick channels Stéphane Grappelli with aplomb, his fingers flying over the fingerboard, adding frequent wah-wah flourishes. His fiddle playing elsewhere is fluent and breezy. Although the tracks on which he picks up his mandolin offer textural variety, eleven numbers led by Anick’s violin would have made a greater whole. Nevertheless, this is a stylish release.