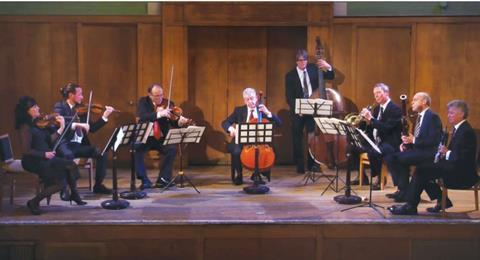 There were many good things in this performance of Schubert’s Octet, slightly marred by the sense that players were not entirely comfortable: intonation and ensemble were both a little off in places. Nevertheless, there was a happy sweep to the first movement and great lyricism in the following Adagio, with fine playing from violinist Manon Derome and cellist Anthony Pleeth.

Pleeth provided a fine walking bass in the trio of the jaunty third movement, at once busy and insouciant, and Derome produced fine, filigree playing in the variations of the fourth. A touch of ponticello added menace to the opening of the finale, which went on to be lively and easy-going. It wasn’t perfect, but it had the feeling of music making among friends.

Those odd lapses still appeared occasionally in Beethoven’s Septet, which had open-hearted and engaging playing, with some neat contributions from the strings in the fourth-movement theme and variations, and heady drama in the finale. Derome skipped a chunk of her cadenza, but the high-spirited finish had the audience cheering.