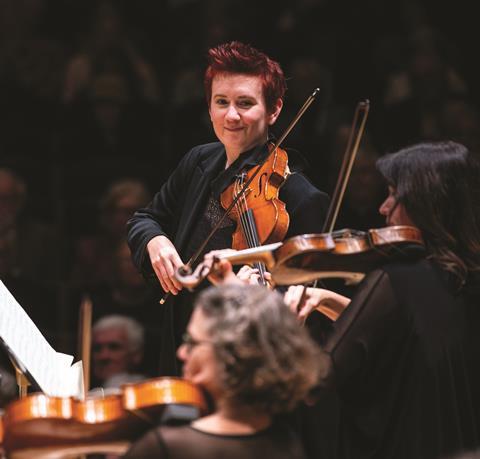 Boston’s acclaimed Handel & Haydn Society presented a 17th-century programme ‘Christmas with the Strads’ at the Metropolitan Museum of Art, featuring one of the Met’s Stradivari violins, the ‘Gould’ (1693), played stunningly well by Aisslinn Nosky. Biber began and ended the programme, and the Passacaglia in G minor was magnificent. Nosky’s ornamentation was natural and seemingly effortless, and her articulation striking in its clarity. She gave beautiful direction to the lines and the difficult double-stops never seemed to hinder the overall shape, but instead contributed to her clear sense of the architecture of the work. Equally stunning was how clear her semiquaver runs were – especially as she used very minimal bow! Vivaldi’s Concerto in E major RV270 revealed Nosky’s unusually rich tone. Paired with her soaring, expansive lines, the violin part never felt weighed down by the depth of her sound, but rather floated above or playfully wove in and out of the ensemble. She played the outer movements with character and poise; the Adagio was simple and simply beautiful.

Two works featuring wind instruments followed – Telemann’s Concerto for recorder and flute, and Albinoni’s D minor Oboe Concerto – and both featured impressive solo and tutti playing. The articulation of the ensemble was extraordinary, and tuttis were played with great momentum and energy, though never sacrificing clarity. Both wind soloists – Debra Nagy on recorder and oboe, and Emi Ferguson on flute – were magnificent. Torelli’s Concerto Grosso op.8 (‘Christmas Concerto’) was sandwiched between the wind pieces, and in particular the first movement was performed with enormous rhythmic energy: Nosky’s leading was dynamic, almost charismatic. Delalande’s Symphonie de Noël and Charpentier’s Noël pour les instruments were the final ensemble works on the programme, and performed in succession. They featured absolutely gorgeous playing – especially from the violin – carefully shaped phrases and a truly beautiful approach to music that can sound sing-songy, supported by superb continuo playing by Guy Fishman and Heather Miller Lardin. Led by Nosky, the Handel & Haydn Society presented some of the liveliest, most characterful and engaging period-playing I’ve heard.