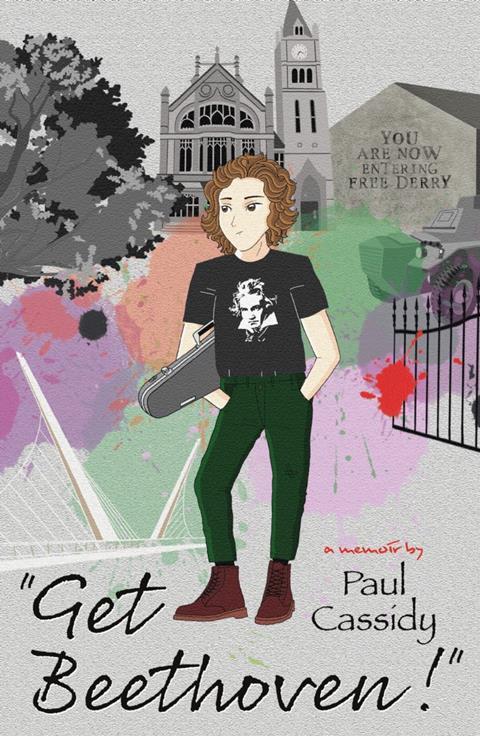 Paul Cassidy has been violist of the Brodsky Quartet for four decades. He is a Northern Irish Catholic, brought up in Derry as the last of 16 children – the next youngest may have been abducted soon after birth, just one of the tragedies the family had to bear.

It seems to have been quite a dysfunctional family, with a father who did not encourage any of his tribe of offspring. Cassidy also had to deal with his country’s Catholic education system – having his hand beaten black and blue, days before his Grade 7 violin exam, was typical. Then there was the discrimination that Catholics suffered in every sphere of life. In the case of the Cassidy clan, it was intensified because they had the affrontery to acquire a house in a part of town that the Protestants considered their fiefdom.

It is quite a tale, but the telling reminds me of a well-oiled Irishman buttonholing you in a bar. The stream of consciousness can pall after a time, especially as it badly needs an editor – we are offered ‘flowery’ for floury, ‘unchartered’ for uncharted, ‘it’s’ for its, ‘prize’ for prise, ‘lead’ for led and so on. Many passages could gain from being trimmed, while others need some clarification.

Reading about a musician’s early life, you want to follow his musical progress, but it often submerges for some time; and when it re-emerges, he has leapt ahead. He must have been astonishingly talented – the story of how he was accepted for the Royal College of Music can trump most people any day of the week. However, he never really explains what led him to give up the violin for the viola.

But an end to gripes. When Cassidy gets the bit between his teeth, he can really bring his tale to life, as in the chapter headed ‘War’ about the Troubles. The bar his father has run for 40 years gets blown to smithereens, undoubtedly because a member of the Provisional IRA has been offended. It is a miracle that Paul and so many others survived those times. The deployment of the British Army, which should have improved the situation, only made matters worse. Cassidy avoided being drawn into the IRA, although he was inducted into its youth section.

Funnily enough, the book’s title refers to an episode that took place not in Derry but in Ayr, when Cassidy’s visiting youth orchestra was constantly besieged by Scottish yobs. He was wearing a black T-shirt with a portrait of Beethoven on it, and was rightly affronted when the yobs knew just enough culture to yell: ‘Get Beethoven!’ One senses his relief when he got out of Ireland and made it to London.

Some names familiar to readers of The Strad flit in and out of these pages: Hugh Maguire, Donald McInnes, Bruno Giuranna, Quintin Ballardie (misspelt), Mstislav Rostropovich. At least one name is changed to a pseudonym but this disguise will be transparent to most readers. There are good anecdotes and hoary old jokes.

The last few chapters find Cassidy joining the Brodsky Quartet, the other three of whom have been together since childhood; falling in love with the cellist Jacqueline Thomas; marrying and having children. A second volume following the fortunes of the quartet is promised and I look forward to it, but I hope he will find an editor!

The book is not illustrated but photos can be seen at paulcassidy.eu – even one or two would have brightened this autobiography.