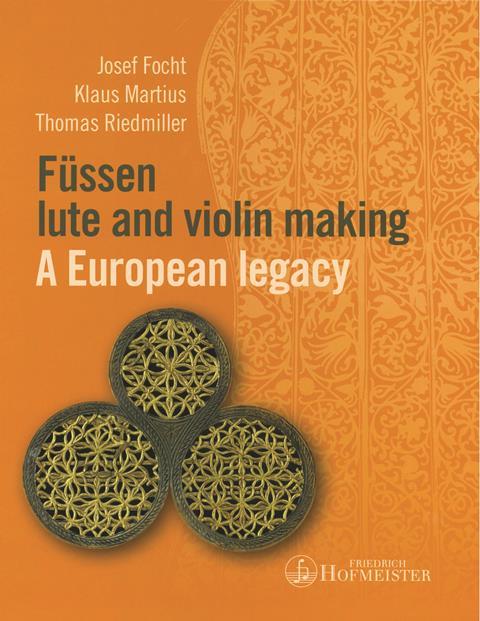 I can honestly say that it gives me great pleasure to review this book. It reveals a subject that I have wanted to learn about for a very long time, and in a very absorbing and beautiful way.

The phenomenon of the German town of Füssen, at the heart of lute making throughout Europe since the 16th century and a breeding ground for makers of both lutes and violins that spread to populate cities right across the continent, is a fascinating one. The publication of Richard Bletschacher’s book Die Lauten- und Geigenmacher des Füssener Landes in 1978 was an introduction to the idea that instrument makers from there introduced their craft in many cities throughout Europe, including Italy, where they were a powerful influence on the development of violin making. This new book explores all sides of the subject, providing a colourful context in a wide exploration of the social, cultural and economic situations of craftworkers. The authors come from the excellent Leipzig Musical Instrument Museum, the National Museum in Nuremberg, and the Museum of Füssen itself.

I have always assumed that it was the fine mountain spruce tonewood that was readily available in the region that made Füssen a centre of instrument manufacture. What this fascinating book reveals is that yew wood, the elegantly striped material favoured for lute backs, was also a valuable local resource. The wood that provided medieval England with longbows was also the material for the finest lutes in Europe. In the 16th century yew-backed lutes were in particular demand in Venice, and it was this that brought the Füssen workmen there, and then to Rome, Genoa and Turin, where they formed the foundation of the specialist instrument making shops in the areas of each city that later became home to the violin makers. In many places, the local Italian makers learnt their craft from these Füssen immigrants, who were the seed of what became an essentially Italian-dominated trade in the 18th century.

Intriguing insights into the social and working lives of early lute makers come through the highly organised and well-documented state controls. While lute makers are recorded in Füssen as early as 1430, by 1606 there was a specific guild for lute and violin makers, and the archival records have yielded wonderful details to the authors, such as the fact that lutes and violins were packed in barrels and shipped on simple rafts down the local Lech river and on to the Danube to market.

The authors carefully draw links between lute and violin making techniques and design principles, emphasising why violin makers still often describe themselves as ‘luthiers’. The text is liberally filled with illustrations of Füssen lutes, and also of contemporary paintings and other matter that brings everything to life. From Wolfgang Wolf, one of the first named lute makers in the mid-16th century, to Füssen’s first self-described violin maker Jonas Heringer in the early 17th century, we arrive at the prolific Stoss family, which defined the Füssen violin trade in the 18th century, and we have been shown in rich detail the background that produced them all.

The effects of European politics and the violence of the Thirty Years’ War and the later Napoleonic campaigns are examined and explained, and it seems astounding that the trade in Füssen continued almost unabated until the early 19th century. The sad coda includes the frustration of Willibald Lütgendorff, the great historian of violin making, at being unable to gain any information about the town’s instrument making history at the end of the 19th century. It was Lütgendorff who called Füssen ‘the German Cremona’ and made the justifiable observation that Cremona might have been inconceivable without Füssen. This rather mirrors the earlier crisis in Cremona itself; little more than 50 years after the death of Stradivari, Guarneri and Bergonzi, Count Cozio di Salabue was also struggling to uncover the city’s own disappearing heritage.

This book effectively brings the lives of these pioneering craftsmen to life amid the everyday practicalities of making and selling their work, something that is often missing in romanticised accounts of the more widely revered makers of Italy. It is an absorbing and illuminating text of great value to anyone with an interest in the history of instrument making.