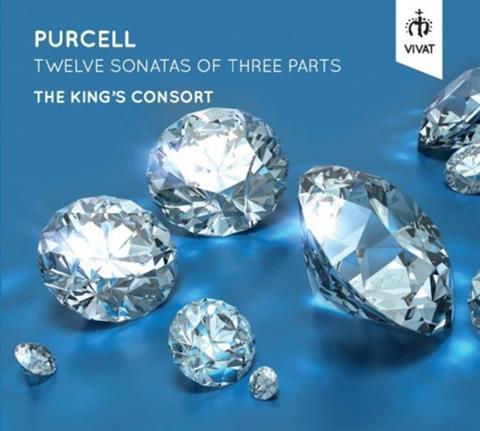 In the preface to his first set of 12 Sonatas – published in 1683 when he was only 24 – Purcell modestly declared that he had ‘faithfully endeavour’d a just imitation of the most fam’d Italian Masters’, acknowledging the impact of a new kind of flair-driven virtuosity from the peninsula. Yet in truth his music remains grounded (no matter how exotically flavoured) in the fantasia style that was his natural inheritance. It is enhanced by a tantalisingly exquisite harmonic idiom that fuses the modal and scalic in a series of heart-tugging suspensions, offset by passages of heady contrapuntal ingenuity.

Following up his outstanding collection of Purcell’s ten sonatas in four parts, Robert King returns to the fray with virtually the same team – violinists Cecilia Benardini and Huw Daniel and theorbist Lynda Sayce, but this time with Reiko Ichise on bass viol – captured by producer Adrian Peacock and engineer David Hinitt in exemplary sound that envelops the performances in a gentle sonic halo. King’s noble restraint works wonders here as his gifted team’s infinitely subtle micro-inflections (as witness the opening Canzona of no.7) retain a compelling sense of temporal and structural integrity. This pays special dividends in the more vivacious numbers (the skipping rhythms of the Twelfth Sonata’s penultimate section, for example) which appear to dance on air.