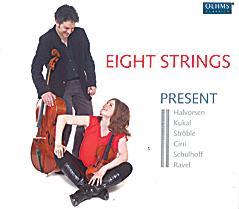 This disc sheds light on some of the byways of music for violin and cello, stretching back to the late 18th century with the Italian-born composer and cellist Giovanni Battista Cirri. His duo, recorded here for the first time, forms part of six duets written in 1770 during his time in London. Coming much closer to the present time we have two short pieces in fashionable crossover mood from Tim Ströble, and a score from the Czech-born Ond?ej Kukal that follows in the footsteps of Piazzolla.

In their style of playing and musical inclinations, Valeria Nasushkina and Mikael Samsonov appear better suited to modern works than those of yesteryear, and are equally at home with Erwin Schulhoff’s energetic Zingaresca, which is performed with a gypsy abandon. They also contribute one of the more persuasive accounts of the Ravel Sonata for violin and cello I have heard on disc, never sounding self-conscious, as is often the case, in its many dramatic effects.

However, the opening track, Halvorsen’s Handel adaptation, exposes Nasushkina’s shaky intonation in fast passages, and as the disc progresses, Samsonov’s is not perfectly clean in the more challenging sections. The sound is well balanced despite obvious added reverberation.