Your desk or mine? The pleasures and pitfalls of having an orchestral desk-partner 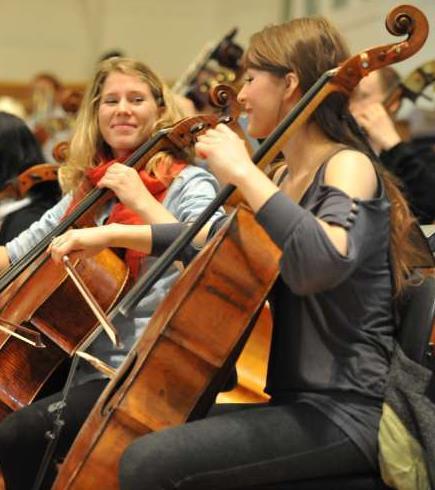 As an online agony aunt for classical musicians, I’m often asked how to cope with erring desk-partners. Oddly enough, it isn’t players in full-time orchestras who generally write about this (possibly because they’ve sorted it out already; possibly because they’ve lost the will to live). No, most of the desk-partner traumas come from my fellow freelance players and follow a certain pattern:

‘The entire rehearsal my desk-partner continually put the tip of her bow on the bar the conductor indicated. She’d obviously decided that I couldn’t count, didn’t care or was likely to bring shame and anguish on our desk, while I felt more and more fed up. What should I have done?’

‘The guy beside me rushed so badly that the conductor spent half the rehearsal glowering at our desk, and I’m sure the principal will never ask me again. How can I let him know it wasn’t me?’

‘When, Alice, if ever, is it fair on one’s desk-partner to imbibe, between rehearsal and concert, a garlic-laden Korean meal?’

As so often, our colleagues in the theatre have it even worse (imagine having to passionately embrace an actor who’s just come back from a Korean restaurant) but it’s still pretty rare for a play to involve actors staying within an arm’s length for the whole of both acts.

Indeed, the proximity issue of orchestral playing has been too infrequently considered. Your husband may detest his boss, but at least he’s not close enough to ascertain his brand of aftershave for six hours a day. Your neighbour may loathe one of her colleagues, but she is not usually obliged to share an enclosed work-space with this person. And in few (if any) other professions is a colleague’s lousy craftsmanship able to wreck so totally the effect of one’s own. (How many of us have soared loftily upwards in an Elgar symphony, only to hear, with sinking soul, clear evidence from behind that yet another lukewarm review is headed our way?)

Attraction, too, is a fact of orchestra players’ lives. Not all desk-partners come straight from the casting books of Slobs I Have Known. Some have foreign accents or divine bow arms. Some make turning the page into a movement of deeply erotic significance – the raised eyebrow, the secret smile. One ex-desk-partner of mine used to launch into fifth position on the G string – completely unnecessarily, mind – with such panache that I still feel warmed-up remembering it. How many relationships must have been made or marred by desk-partnering! No wonder old-fashioned sorts still hanker after the cosy gentlemen’s clubs that orchestras used to be.

Such days are past, luckily, and here are some bang-up-to-the-minute rules I’ve devised for being the perfect desk-partner in the 21st century:

One final rule: it’s a courteous notion, if you’ve had a decent experience with a desk-partner, to say you enjoyed it and look forward to seeing her around. And if you’ve suffered the desk-partner from hell, there’s always that time-honoured phrase: ‘It’s been a great pleasure working with you’.