‘The most perfect music ever written’: Violinist Leonidas Kavakos on recording Bach’s Solo Sonatas and Partitas

’Bach’s music is a reflection of life, and life is not always serious – there is also humour and dancing, and uplifting moods to counter the darker ones.’ 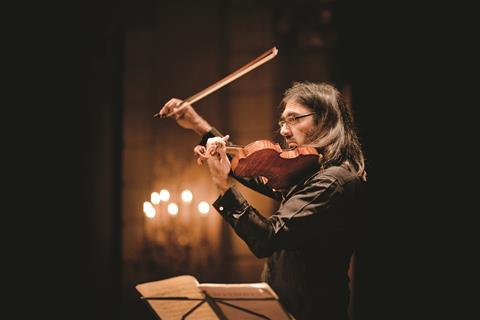 The following extract is from The Strad’s March 2022 issue  feature ‘Leonidas Kavakos: Deep Thinker’. To read it in full, click here to subscribe and login. The March 2022 digital magazine and print edition are on sale now

I’m speaking to Leonidas Kavakos about Sei solo, his new recording of Bach’s Sonatas and Partitas for Sony. It’s perhaps surprising that this is the first time the celebrated Greek violinist has committed the complete set to disc, and that 20 years have passed since he recorded his album featuring the First Sonata and the First Partita interspersed with Stravinsky’s Duo concertant and Suite italienne for ECM in 2002. But his reason for waiting until the relatively advanced age of 53 (his age when the recording was made in December 2020) to put his personal stamp on the seminal works dates to that revelation of more than three decades ago. It prompted a complete and fundamental rethink of his approach to Bach – so much so that it would be nine years before he would perform the works live in concert again. And rather than race to share his new insights with the world on disc, Kavakos decided to wait until his new attitude felt ‘natural’.

It’s true that at the time of the partial 2002 recording it had been 13 years since Kavakos first heard Kuijken’s album, so he’d had plenty of time to develop his revised approach to Bach: ‘By then, it was not totally new to me any more – but it was still much newer then than it is now,’ he qualifies. ‘On this 2022 recording, the slow movements are more deliberately narrated, and the fugues breathe and swing more. It’s better structured and there’s greater emphasis on the polyphony.’

So, what did Kavakos hear that so altered his outlook in 1989? ‘First of all, the lower tuning on that album completely opened up the sound of the violin,’ he says. ‘The lower frequency creates space so that the bass notes actually sound like bass notes. Because the violin is a high-frequency instrument, we generally miss the depth of the lower registers. But more than that, a darker G-string colour can also affect the colour of the D, A and E strings, making them sound freer. Perhaps it’s a bit less powerful because there’s less tension on the bridge, but the sound is so much more relaxed and singing – and the instruments love it!’

This singing quality went hand in hand with the second element of Belgian Baroque violinist Sigiswald Kuijken’s recording – a move away from the all-consuming seriousness of recordings of the time to a lighter, ‘swinging’ style. ‘Bach’s music is the most perfect music ever written, and he was a source of inspiration to all composers who came afterwards,’ explains Kavakos. ‘But his music is a reflection of life, and life is not always serious – there is also humour and dancing, and uplifting moods to counter the darker ones.’

But these differences in style and tonal colour paled in comparison with the technical matter of chord distribution. ‘There is no law in mathematics that two plus two equals three. But when we violinists are presented with a three-note chord, for some reason we divide it two and two,’ he marvels. ‘I don’t believe this is correct in any circumstance; but particularly in Bach’s music, which is full of such chords, this becomes very tiring – and it makes it seem like our instrument, the “poor violin”, isn’t really capable of supporting Bach’s concept of polyphony.

‘Instead, we should look at the notes of the chord as if they are different actors in a stage play. In a three-note chord there are three actors, each pronouncing one word. Most important in this situation is timing, because if all three performers say their word together and with the same emphasis, this will confuse the audience. The voices shouldn’t sound equally and at the same time. Instead there should be an inequality in terms of note distribution. It’s also important to remember that not all chords must follow gravity and the curve of the bridge to end on the E string. It’s possible to promote the melody with the right support from voices both above and beneath the line.’

The shift towards lightness and buoyancy might seem in keeping with the use of a more nimble and dexterous Baroque bow, but Kavakos is adamant that his modern bow is the better tool for performing these works. Again, the decision relates to chord distribution. ‘Using a Baroque or Classical stick would force me to play most of the chords with a down bow, and I don’t have that restriction with my modern bow,’ he explains. ‘A Baroque or Classical bow is so useful in learning how to treat the music – it leads you to play as it should be played. But once you have that knowledge, there is simply no period bow that can match the capability of a great bow by Tourte or Peccatte.’