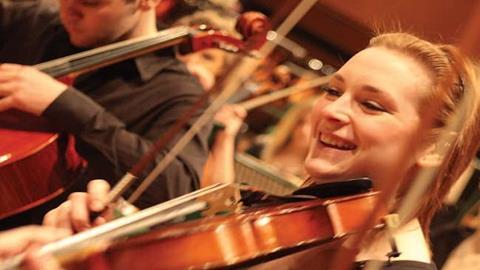 There is a persistent argument that pervades the classical music world: to learn an instrument properly, you must start young and work hard, because it is the only way to develop your ear, your mind and your muscles quickly, effectively and in a way that will serve you for the whole of your musical life.

Whether a child is destined to become a soloist or not, they must slave away from school to college, otherwise when the time comes to choose their profession, they won’t be good enough to continue if they want to.

If they start when they are older or they do not progress fast enough, they will never be able to play those big Romantic concertos or build a decent career in music. Even then they will have to work, work, work, through blood, sweat and tears (sometimes literally), to achieve their goals.

But why does musical development have to be like this? A student who is not enjoying music is unlikely to practise as constructively as one who is. For those who are beginning to resent their instrument, perhaps persistence is not the key – instead the wisest thing to do is to take a break, gain a new perspective and return to it later with a refreshed approach.

Admittedly, yes, many of us are pleased that our parents made us practise when we were growing up – it can open up a whole world of friends, work and fun in adult life. But the late teens and early twenties can be times of great uncertainty, and forcing yourself through hours of practice when you’re not sure what you want to do with your life can do more harm than good.

Many students go through music college without really wanting to be there. They practise reluctantly in order to pass their exams. They do not always progress as quickly as they should, because they have gone to college as a product of the education system: they had to study something, and they have ended up studying this.

In some cases, competitiveness, bitchiness and seemingly insurmountable challenges have made them bitter and dulled their will to learn – even if they were enthusiastic to begin with.

Some teenagers won’t want to spend their lives cooped up in practice rooms; if they’re forced to stay there for years, until they emerge into the daylight post-college, their musical mentality may not be in a healthy state. If, on the other hand, those who are struggling to keep up their enthusiasm take a step away from music for a while to pursue other interests, they might find new determination later. If not, perhaps taking that step away from music was for the best in the long term.

For those who do return, the feeling of a musically misspent youth might give a level of drive that results in a higher rate of progress. Why do institutions like the Paris Conservatoire refuse to admit anyone beyond their early twenties?

Surely someone a little older with more enthusiasm and determination, and a broader life perspective, will be capable of reaching greater musical heights than an uninspired teenager.

Similarly, why aren’t more summer courses dedicated to helping serious adults, from advanced amateurs to rusty professionals, build on their existing skills? It can be difficult to find training camps pitched at that level: most seem to be aimed at playing-for-fun OAPs or virtuoso teenagers.

I know some players who have picked up new instruments when they were over the age of 50 and, through hard work, achieved admirable standards. Fine, they will never be top soloists, but they will always be genuinely enthusiastic players who will love music to the bitter end. If taking a break from music for a few years is what enables some youngsters – or even more seasoned adults – to take a step back before running back to it with open arms, so much the better.

Who knows: later, their new-found enthusiasm might propel them to a musical future that is healthier and more accomplished than that of their disillusioned peers.