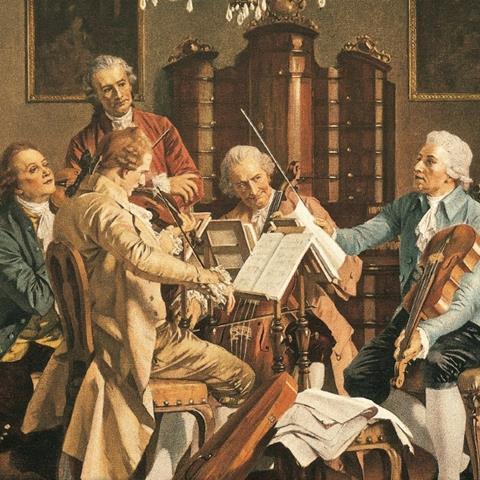 The following article is published as part of a larger feature on Quartet Playing in History in The Strad's August 2016 issue. Click here to subscribe and login. Alternatively, download on desktop computer or through The Strad App.

This notion of string quartets as social music has much to do with the traditional comparison between quartets and refined conversation. And to make this comparison was to pay the string quartet a high compliment: in the 18th century, conversation had been elevated to a bona fide art form worthy of meticulous cultivation, since displays of conversational wit carried great social cachet in Enlightenment salons.

Many people, including Haydn, owned popular books that offered tips and instruction on how to cultivate conversational skills. In her essay ‘The Spirit of Conversation’ (1813) the celebrated Enlightenment hostess Madame de Staël compares conversation to music, and writes of the former:

It is a certain manner of acting upon one another, of giving mutual and instantaneous delight, of speaking the moment one thinks, of acquiring immediate self-enjoyment, of receiving applause without labour, of displaying the understanding in all its shades by accent, gesture, look; of eliciting; in short, at will the electric sparks, which relieve some of the excess of their vivacity, and serve to awaken others out of a state of painful apathy.

These vivid remarks illustrate just what it meant for authors to draw parallels between string quartets and conversation, the latter requiring the utmost intellectual engagement yet possessing intoxicating effects that Staël compared to those of liquor.

Today this comparison between quartet and conversation is strongly associated with Goethe, who in an 1829 letter famously described Beethoven’s quartets as resembling ‘four intelligent people conversing among themselves’. But the idea in fact stems from several decades earlier, and by the time of Goethe’s letter had become something of a cliché.

As early as 1764 the first edition of Haydn’s op.1 quartets was published in Paris with the title Six simphonies ou quatuors dialogués, that is, ‘symphonies or dialogued quartets’. ‘Quatuor dialogué’ became such a common title for Parisian quartet publications that it essentially became synonymous with the genre, especially for compositions in which melodic action is distributed relatively evenly among the parts. Since string quartet playing and conversation were both vivacious activities that small groups of intelligent gentlemen could enjoy together, the one became essentially a stand-in for the other.

The Strad's feature on Quartet Playing Throughout History is published in the August 2016 issue. Click here to subscribe and login. Alternatively, download on desktop computer or through The Strad App.