His method books transformed violin pedagogy, but Otakar Ševčík’s later studies based around the concerto repertoire languished until rediscovered by Endre Granat. In this article from December 2009, Granat argues that Ševčík’s analytical approach can be applied to any work 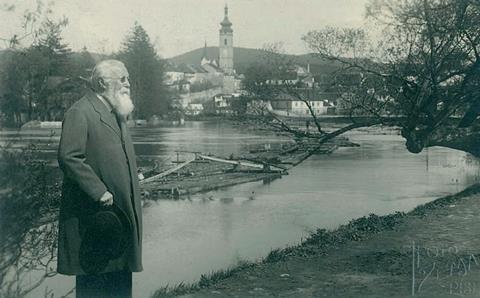 Otakar Ševčík (1852–1934) changed forever the way violin technique would be studied with the publication in 1881 of the four volumes of his op.1, Violin Left-Hand Technique. Instead of long-winded, meandering studies, the 29-year-old newly appointed professor at the Kiev Conservatoire had developed a more concise method that deconstructed technical difficulties into their smallest components, progressing from simple to complex. Ševčík used this same model in his six-volume op.2 that followed shortly afterwards. His method opened a door to overcoming technical problems in the shortest possible time with the least expenditure of energy, assuring rapid progress and technical proficiency. These initial works established Ševčík as one of the foremost pedagogues of his time.

By the turn of the century, it became apparent to Ševčík that his existing exercises, with the exception of the unpublished op.5, Analytical Studies to Dont op.35 (the original manuscript of which I discovered in Prague in 2009), were not adequate for developing the technique a violinist would need to perform major works, such as the concertos by Brahms and Tchaikovsky. So nearly 50 years after the appearance of his op.1, Ševčík’s pioneering spirit took him in a new direction: writing repertoire-specific exercises.

The new repertoire-specific exercises expanded upon an idea that Ševčík had first explored with his op.5. He believed that a student’s ability to analyse and learn in a systematic way needed to be rigorously reinforced to improve practice efficiency. His method of teaching included the writing of short studies called ‘purpose exercises’, each of which addressed a specific technical skill. Ševčík analysed a concerto or a virtuoso showpiece and isolated its inherent technical problems in order to focus on one issue at a time. Gradually, the student would put the pieces of the puzzle together and be able to give a successful performance of the difficult work in its entirety.

At the end of the 1920s, Ševčík expanded these ‘purpose exercises’ into printed form, starting with his op.16, which covers 45 works of various lengths. Wieniawski’s Scherzo-Tarantella, Bazzini’s Dance of the Goblins and Paganini’s Witches Dance and Moses Fantasy are a few of the compositions analysed in op.16. The next several volumes, opp.17–21 and op.25, are devoted to the complete violin concertos of Wieniawski, Brahms, Tchaikovsky and Mendelssohn, as well as the first movement of Paganini’s D major Concerto and the Joachim cadenza to the Brahms Concerto.

Opus 26, in four volumes, is an elaboration on Kreutzer’s 42 Studies. Ševčík’s Analytical Studies based on these works from the concerto repertoire are quite substantial. For example, those based on the Brahms Concerto run to more than 90 pages. Each edition includes a solo violin part, a piano accompaniment, often a second violin accompaniment, and the Analytical Studies for the particular piece.

In the Analytical Studies, each bar is addressed separately, and Ševčík goes to extreme measures to separate the different left- and right-hand difficulties, suggesting a solution for each possible problem. Throughout these works, Ševčík included his own musical interpretations, sometimes taking greater liberties than any present-day teacher or performer would dare to try. Expressive elements are tackled from a technical point of view: there are exercises for problems of dynamics, length of fermatas and transitions between different tempos.

A LIFE IN TEACHING

AFTER 17 YEARS AS PROFESSOR at the Kiev Conservatoire, Ševčík’s tremendous success there resulted in an invitation to be a professor at the Prague Conservatoire. Among his first students were Jaroslav Kocián and Jan Kubelík, who became the most successful violinist of his time. When Antonín Dvořák became president of the conservatoire in 1901, he appointed Ševčík as head of the violin department. Talented players from many countries came to Prague to study with the master, who had become one of the most sought-after teachers of his day. By this time, Ševčík ’s compositions were available worldwide, including his opp.1, 2, 3, 6, 7, 8 and 9. After Dvořák’s death in 1904, Ševčík left the conservatoire along with an entourage of students, affectionately named the ‘Ševčík Colony’, and moved to Písek.

It is here that Ševčík’s contemporaries found grounds to attack the ageing master. Carl Flesch wrote in his diary in 1931:

‘During the past 20 years, Ševčík began to adopt methods that were increasingly stupid. He made pupils play passages backwards, omitted slow movements of concertos as technically uninteresting, and dissected compositions into minute parts of two to four notes at a time, which he made his pupils repeat again and again as finger exercises – all this a symptom of senile dementia. Clearly these unfortunate young people were bound, sooner rather than later, to lose all contact with living art and to be degraded into soulless machines – which function badly, to boot.’

It is well worth examining Flesch’s comment, since he was a tremendously knowledgeable and astute observer of his colleagues. I do not believe that Flesch was professionally jealous of Ševčík . After all, Flesch was then at the peak of his career as a performer and pedagogue. Instead, it was his teaching philosophy that clashed with Ševčík’s pedagogical ideas. Flesch failed to recognise the genius in the exercises that produced phenomenal results. We must realise that Flesch belonged to a younger generation and as a graduate of Marsick’s class at the Paris Conservatoire, his approach to violin playing and musical performance was vastly different from that of Ševčík.

Whereas Ševčík never strayed from the Bennewitz method, Flesch espoused many innovations of the Auer school, especially after hearing Mischa Elman and Jascha Heifetz. By the 1920s, the French and Russian bow hold prevailed, resulting in a sonorous and consistent tone production. Expressive and steady vibrato became the norm. In contrast, Ševčík preferred the so-called German bow hold, and his musical taste regarded vibrato as an embellishment to be used judiciously. Flesch’s practice method was based on motions that obtained the best result with the least effort. Like Leopold Auer, Flesch restricted his student’s practice time to three to four hours daily. Ševčík, however, requested a daily routine of seven to eight hours of practice time from his students.

Ševčík’s analytical study to the Brahms violin concerto, op.19 and to the Joachim cadenza, op.25

It is very likely that Ševčík heard Joachim perform the Brahms Violin Concerto. The work was dedicated to Joachim and premiered by him, and the cadenza he composed has been the standard ever since. Ševčík’s excessive editorial liberties and his choice of fingerings and bowings hark back to a style no longer valued in the Kreisler and Heifetz era. Op.19 was not successful when first published because the young virtuosos of the time did not appreciate the underlying genius of these studies.

The Analytical Studies to the Brahms Concerto, along with other works in this series, have to be modified by the performer to reflect his or her individual fingering and bowing preferences. This approach allows for and encourages experimentation. Example 1, an excerpt from the first movement of Ševčík’s edition of the Brahms Concerto, shows some of Ševčík’s editorial excesses: hairpins on the downbeats of bars 224 to 228 and 233, an fz in bars 230 and 231, a rather heavy-handed glissando in bar 230, a marcato accent in bar 232 and a crescendo in bar 234. None of these markings exist in the Urtext. The Analytical Study to the concerto (example 2) demonstrates Ševčík’s method of solving technical problems of the lusingando section shown in the previous example. He masterfully turns single notes into double-stops to facilitate perfect intonation. 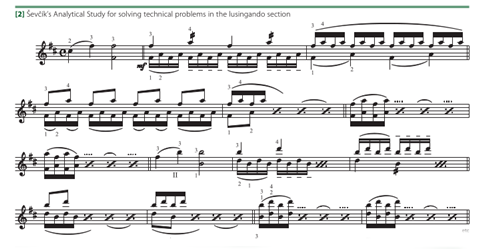 This is where the Analytical Studies shine, giving a veritable treasure trove of material to solve all possible technical problems. Practising should be done with a clear goal in mind and with total concentration. Each section between double bars should be repeated four to five times in a comfortable tempo before moving on to the next section. The tempo should increase as the comfort level rises.When the technical difficulties have been resolved, the student should play the Analytical Studies from beginning to end to ensure complete mastery of the work. All of Ševčík’s repertoire-specific exercises were written with his own fingerings and bowings in mind, so they may have to be modified to fit different fingerings and bowings.

Although Ševčík only completed a handful of repertoire-specific works, his method of preparation can be applied to any work after the student has established bowings and fingerings. Then, appropriate exercises to overcome the difficulties can be devised. Let’s take a passage from the second half of the middle section of Paganini’s Caprice no.13 (example 3).In bar 4 of this excerpt, you must place the first finger on the 5th (G/D) in order to avoid unnecessary motion. 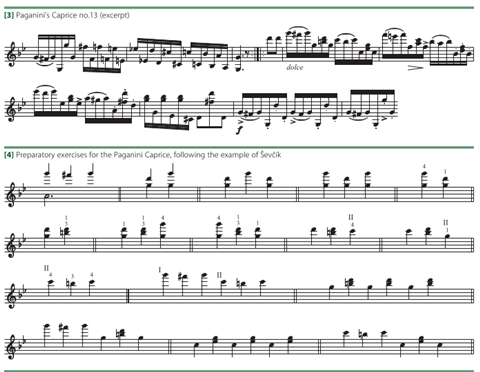 From this G/D axis, all other intervals are tuned, beginning with the high G and then moving to the minor third (B/D). The established 5th also builds the bridge to the second half of the bar. Once again, the first finger must be placed on a 5th (C/G) to secure exact intonation. I’ve created several exercises to demonstrate how one might practise this bar by applying Ševčík’s method of analysis (examples 4 to 8). All of these preparatory exercises must be practised extremely slowly, with perfect intonation, before any attempt is made to increase the tempo. In addition, each exercise should be repeated multiple times between the double bars. As soon as intonation is secure, the tempo should increase from minim to crotche, quaver and semiquaver notes. Finally, bowing and rhythmic variants are introduced. Each of these exercises should be practised both in piano and forte dynamics.

Ševčík’s method of teaching stressed technical perfection. In his early exercises he addressed most possible violinistic problems and provided study materials. To this day, no better, more time-saving studies have been written.

I advise my students to include some left-hand and some right-hand studies in their daily dozen, but remembering that these are not mechanical exercises and demand total concentration, I suggest they limit their Ševčík routine to 30 or 40 minutes per day. Based on these examples it is very easy and creatively satisfying to devise one’s own exercises – which is what must have been Ševčík’s ultimate goal with his students. And of course we must not forget that while Ševčík dealt mostly with technical details, technique has to be the servant of music. I hope that a new generation that was unaware of the existence of this method will be able to benefit from it.