On the question of retirement: string players of all ages share their views

Is there a time when we should put our instruments away for good? Pauline Harding talks to musicians young and old about falling standards, failing physiques and a joy of playing music that, if we want it to, should carry us to our graves 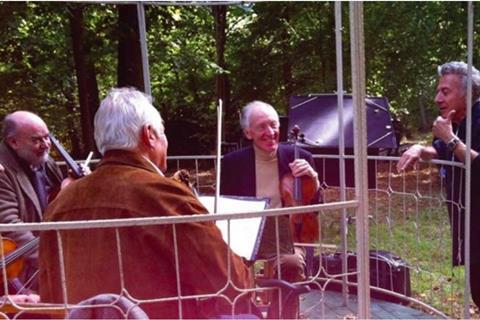 To retire or not to retire is a very personal issue, and the decision may fall beyond our control. John Georgiadis – who led the London Symphony Orchestra in the 1960s and 70s and the Gabrieli Quartet for four years from 1986 – retired from professional playing in the early 2000s after unexpectedly losing his nerve. ‘I was doing a session, sitting in the leader’s seat and feeling quite comfortable, when I turned the page and it said “solo”,’ says the 80-year-old. ‘It was only a few short notes, but I froze and I had to leave the studio. It shook me to my core because I’d never felt anything like that before. Suddenly, it was as though the whole world had been taken from under my feet. After that, thank God I discovered beta blockers. They got rid of that great terror, that panic, and they helped me to play for a few more years.’ But in 2007 he retired officially from his then-position as concertmaster of the Oxford Philomusica.

Other musicians decide to retire for fear of falling standards: violinist Arabella Steinbacher, now 38, already finds it hard to listen back to her own recordings and performances. She would be horrified at the idea of people hearing her if she knew her abilities were failing. ‘You really have to be honest with yourself,’ she says. ‘It’s important to know when it’s time to step back. As soon as I realise that my physical condition is not there any more, I don’t think that I will want to put myself through the stress of performing on stage.’ Mönkemeyer, meanwhile, is curious about how his enthusiasm will fare over time. Now aged 41, he has already started to notice how playing so many similar concerts means that it can be a challenge to stay fresh and inspired. ‘Some musicians have a clear vision of a piece and they practise it to perfection,’ he says, ‘but sometimes they practise the same details for so many years that the original idea becomes a weird caricature. Then there are others who always try to find a different approach, so that the same music sounds energetic, magical and new. To do that you need lots of humility, because you almost have to reinvent yourself and destroy what you have done before. Either we learn to deal with that over the years, or we try to hold on to this moment of fading glory.’

This is an extract from a longer article on retiring from music performance in our February 2020 issue. To read in full, click here to subscribe and login. The February 2020 digital magazine and print edition are on sale now.