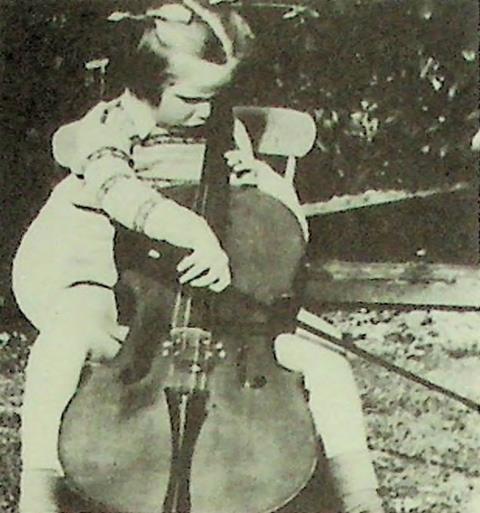 Jacqueline du Pré as a child

Much of her music-making was in the public domain; but in private she would dare even more on the cello, out of sheer exuberance and fun. The grandest musical occasion at our home was when my brother organised a performance of the Mendelssohn Octet on eight Stradivari instruments, and for one evening Cremona came to Campden Hill. Jackie was there with her cello of 1712. By contrast, the silliest occasions were our two-cello sessions. Jackie would play outrageous tricks with rhythm and phrasing, challenging me to follow wherever she led. Musicians of that calibre come rarely into the world; friends too. Robert Anderson

As a personality on the stage she was vital and compelling and she always endeared herself touchingly to her audiences. She adored playing the cello in public. Music-making was so natural to her, and came so easily because of her enormous talent, that it is understandable that this was truly her life. Other interests were almost non-existent.

Off the stage she was a warm, fascinating and most entertaining human being. She had a very retentive memory and a good sense of mimicry so that she could tell stories and jokes with much enjoyment and laughter (and rather earthy humour). She was really great fun, and she continued to be cheerful and smiling through the many years of her cruel illness. Lady Evelyn Barbirolli

She will always be remembered as a warm, giving, fun-loving person who loved to blow ‘raspberries’ and shock you with some of the things she would say. I will also remember the special times we spent together - many times in the middle of the night when we would laugh, talk and drink freshly squeezed orange juice at 3.00am. Of course she had times of anger at being so unwell, but her giggles were more, making her times of anger few. She refused to allow life to pass her by because she was ill. Even in the last week of her life she made me laugh. Ruth Ann Cannings, du Pré’s nurse

Jackie had chosen to stay at home, so I agreed to stay behind to look after her. Eager to get down straight away to playing her child-size cello, she started trying to tune it, her little hands grappling unsuccessfully with the pegs. ‘Play a middle C, uncle’, she demanded, and I immediately, not thinking for a moment that she would know the difference, played the first note that came to hand — I suppose I was too busy watching her antics to pay much attention. Evidently the note I played was not middle C, for all of a sudden, all hell was let loose. Poor Jackie was beside herself with rage at this insulting response to her serious request, and there was no more cello playing that afternoon. Later in the day, she approached me very penitently, saying ‘Solly, uncle’, and generally trying to make me feel better. She had obviously come to the conclusion that my ignorance was to be pitied, not stormed at! But it was that afternoon that I first realised that Jackie was going to grow into someone quite exceptional. Wilfrid du Pré

My strongest memories are of when she came to live with us in our house in North London. She arrived by chance really. After a rehearsal, she was so animated  that she could not face the solitude of her flat In Holland Park. She came home with me and stayed six months!

The house became a veritable conservatoire; endless music went on with the many friends who came to visit. All the men fell for Jackie, and curiously they were all pianists! (The last suitor, Daniel Barenboim, became her husband). Playing chamber music with Jackie was a truly unforgettable experience. After twenty years, the musicians who participated in these sessions all count these happy hours as the most truly inspirational of their lives. I remember her roaring with laughter, as she played her cello lying in bed, In perhaps the first stages of her sad illness, also her fiddle playing, which she held cello style. On her own instrument of course, was her magnificent legato bowing and uncanny sense of phrasing, her daring changes of position, and her special downward portamenti, very evident in the final movement of  the Elgar Concerto. She would always attempt the seemingly impossible shift, and avoid playing safe ’across the string’. Violinist Hugh Maguire