Brahms among the Palms: Postcard from Boca Raton 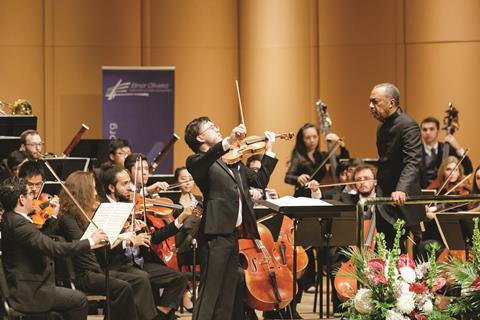 Against a backdrop of palm trees and balmy weather, the finals of the 2020 edition of the Elmar Oliveira International Violin Competition (EOIVC) featured four competitors, from Italy, Russia, South Korea and the US, three of them playing the Brahms Concerto and the other Saint-Saëns’s Third. The competition offers more than $140,000 worth of prizes, including cash, equipment, guaranteed national and international performances, and significant career development, publicity and management support. The finals took place on 25 and 26 January at the Wold Performing Arts Center on the campus of Lynn University in Boca Raton, 50 miles north of Miami on Florida’s south-eastern coast. Classical music may well have been placed firmly on Boca Raton’s cultural map by the success of this, the second edition of the competition.

The EOIVC 2020 began with around 70 applications from 19 countries. The 20 quarter-finalists were aged between 19 and 29 and came from Canada, China, Italy, Korea, Russia, the UK and the US, and eight of these competitors made it through to the semi-finals. Ultimately, the performances over the two nights of the finals presented the jury with four clear choices. 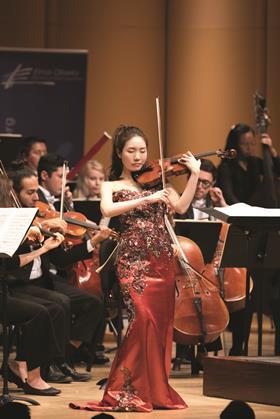 Winner Julian Rhee (19, US), who took home the top prize of $30,000, is studying with Miriam Fried at the New England Conservatory. He played the Saint-Saëns flawlessly with a sophisticated, assured tone, superb intonation, and the kind of poise and showmanship that thrills audiences, especially when it accompanies such brilliant playing. His arpeggios against the clarinet in the Andantino quasi allegretto were exquisite, his virtuosity in the finale was intoxicating; it was no wonder that he seemed to be the audience favourite.

Second prize winner Jung Min Choi (25, Korea), who is studying with Ilya Kaler at the Cleveland Institute of Music, gave the first movement of the Brahms a dazzling reading with a wealth of colour and nuance, a special way with trills, a precise sense of timing and a lovely sense of the music’s arching phrases. But after her almost superhuman beginning, she lost steam somewhat – and perhaps, consequently, the first prize – in the last two movements.

Third prize winner Igor Khukhua (27, Russia), who is studying with Ben Sayevich at Park University in Parkville, Missouri, gave a deeply reflective reading of the Brahms Concerto that risked all – occasionally to profound effect – but never quite hit a consistently compelling stride.

The Honorable Mention award went to Vikram Francesco Sedona (19, Italy), who is studying with Silvia Marcovici at the University of Music and Performing Arts in Graz. His Brahms was so slow in the first movement that it almost seemed to stop at times.

The finals concerts also featured highly accomplished, refreshingly enthusiastic playing by conservatory orchestra the Lynn Philharmonia conducted by Jon Robertson, dean of the university’s Conservatory of Music (who was called a ‘pint-sized Paderewski’ by theNew York Times after his performance as a nine-year-old pianist at New York’s Town Hall). Featuring divided violins and surprisingly polished woodwind and horns, the orchestra laid down impressive swathes of rich Brahmsian sound that gave Choi, Khukhua and Sedona the chance to show they could work with dense orchestral textures without being overwhelmed. And in the Saint-Saëns the orchestra made appropriately sleek and suave sounds.

Oliveira himself, who founded the first EOIVC in 2017, put a strong, unmistakable stamp on the competition. His fierce commitment to modern instruments – he is a noted collector who has commissioned numerous new ones – was reflected in the violins and bows included among the prizes. He also hand–picked the jury and insisted on rules that would assure integrity: no EOIVC competitor was to be adjudicated by any judge to whom they were ‘related/espoused’ or considered a ‘student of’ under the EOIVC guidelines. These stringent requirements were part of the conflict of interest agreement each of the judges and competitors was required to sign before coming on board.

The roster of judges included Sung-Ju Lee (Korea National University of Arts, Seoul), Gerardo Ribeiro (Bienen School of Music at Northwestern University, Evanston, Illinois), Barry Shiffman (Glenn Gould School of the Royal Conservatory of Music, Toronto), Kathleen Winkler (Rice University, Houston), Ilya Kaler (Cleveland Institute of Music) and Silvia Marcovici (University of Music, Graz). Andrés Cárdenes (Carnegie Mellon University, Pittsburgh) was also there, making last-minute changes to his forthcoming biography of his teacher and mentor Josef Gingold. The chairman of the jury was David Cerone, formerly president of the Cleveland Institute, who now lives in Sarasota. Oliveira’s requirement for recusal, which affected some of the panel members (something that is inevitable when judges are of the calibre of the EOIVC jury), was further put to the test when one of the original jury line-up, Mihaela Martin, had to cancel at the last moment and was not replaced. As it turned out, there wasn’t a tie and therefore a deciding vote was not necessary, so the scoring was not affected.

When I spoke to him, Cárdenes singled out ‘the camaraderie among the judges’ for making the competition special. ‘We all were keen on being extremely fair, with judges recusing themselves when their students were performing. Elmar’s presence made the atmosphere one of complete professionalism, decorum and fun. It was a wonderful experience.’ 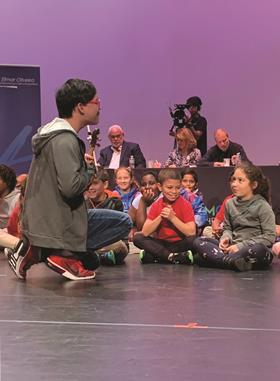 Second prize winner Jung Min Choi played with colour and nuance. Below Julian Rhee connected with students during the community engagement round

Indeed, Oliveira could be seen beaming even before the results were in. ‘The level of violin playing throughout was spectacular,’ he told me. ‘We are thrilled to welcome Julian Rhee to the EOIVC family.’ He added that the young American’s ‘incredible passion, infectious joy and virtuosity are matched by his commitment to reaching into and connecting with the community. He is someone the EOIVC is proud to stand behind and nurture. His will be an exciting career to watch.’

Cerone complimented the choice of Christopher Theofanidis as composer-in-residence. His newly commissioned Discipline and Transcendence for solo violin, part of the repertoire of the quarter-final round, ‘challenged the imagination of each competing candidate’, and with Bach, Beethoven, Paganini, Mozart and a selection of violin concertos produced ‘a truly magical amalgam!’

The informal basis on which the audience and the judges mingled in the foyer of Wold Performing Arts Center was more like summer camp than a red carpet event. The parents of one of the orchestra’s bass players brought with them his three siblings, two of whom play cello, the other violin. It was a family night of considerable warmth.

The organisers also included a community engagement round for the first time this year, during which each of the four finalists gave a 45-minute interactive presentation to children aged eight to eleven at the Plumosa School of the Arts, ten miles north of Boca Raton. The EOIVC claims that to date it is the only contest of its kind to make community engagement part of its competitive process. The winner of the Community Engagement Award, worth $2,500, was Rhee – for his endearing antics, which reportedly had him connecting with the students by getting down to their level on his hands and knees. It was a far cry from Saint-Saëns (and more so from Brahms), but it fit in perfectly with thejoie de vivre of his playing which carried the day and captured the top prize in Boca Raton.