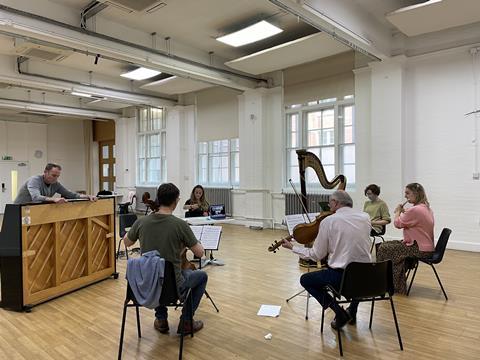 More often than not we cellists – orchestral, chamber or solo - find ourselves sat right at the front of a concert stage and so get to sense an audience in full technicolour glory. Snippets of hushed conversation, whiffs of perfume, a full array of evening footwear, these are our 7.27pm treats as we await the downbeat. It is actually wonderful communing so closely with the expectant public, and only rarely is it off-putting (the smell of chips and vinegar being gulped by a fully tuxedoed front row punter during Carmina Burana being a notable example).

Today though I got as big an audience thrill as I have ever had, and it was from witnessing the reactions of two listeners who were present only on a MacBook on a table some four metres away.

Lesley and Paul Stretton-Stephens had logged onto Zoom to hear the first rehearsal of the chamber opera ’Tomorrow’s Wonder… A Window into Our Lives’, composed by Electra Perivolaris in collaboration with them. Lesley has a rare form of dementia, a syndrome that affects parts of her memory but does not stop her finding so much joy and humour in her daily life shared with her husband Paul.

As with many people living with dementia, Lesley retains excellent recall for long-term musical memories. Scientists can help to explain this, at least in those people living with Alzheimer’s; long-term musical memories are stored in a brain area different from those areas storing other types of memory, and these musical regions are especially resistant to the progress of atrophy caused by Alzheimer’s.

Electra has expertly crafted the opera score around Lesley’s musical reminiscences: the music she played when working as a carer herself for a lady with Alzheimer’s, the music played at her wedding to Paul, the music she heard when she and Paul lived in Valencia. And in between these reminiscences are scenes using words from a description of the sea given by Lesley to Paul, who is sight-impaired, on one of their daily walks along the Devon coast in Exmouth.

And there, remotely present at our rehearsal, were Lesley and Paul in their yellow-lined Zoom square, tiny but visible figures on the Macbook that had to be placed all those metres away for its camera to have the opera’s instrumental ensemble – harp, flute, viola and cello – in view. To be playing a Spanish melody that reminded Lesley and Paul of their time in Valencia as a young couple, now spun by Electra onto the cello in dialogue with viola, was privilege enough. But to witness Lesley’s face light up in recognition of that melody as her head dropped lovingly onto Paul’s shoulder - 150 miles away but so very present - was a moment of audience feedback that I’ll treasure forever. 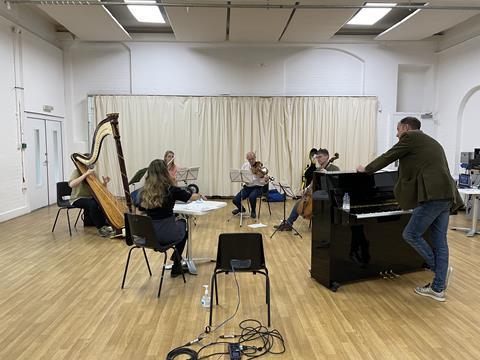 New opera company Theatre of Sound’s ‘Bluebeard’s Castle’ and ‘Judith’s Castle’ will take place at Stone Nest in Soho, London from 4-14 November. The two relaxed and informal Judith’s Castle events – featuring performances of ’Tomorrow’s Wonder… A Window into Our Lives’ – are free of charge and will take place at 2pm on Saturday 6 and Saturday 13 November lasting approximately 45 minutes. More information can be found here