The Strad's assistant editor Pauline Harding performed with her quartet as part of 'Musicircus' at the Aldeburgh Festival – and fought to be heard in a cacophony of whistling winds, brass bands and bongos 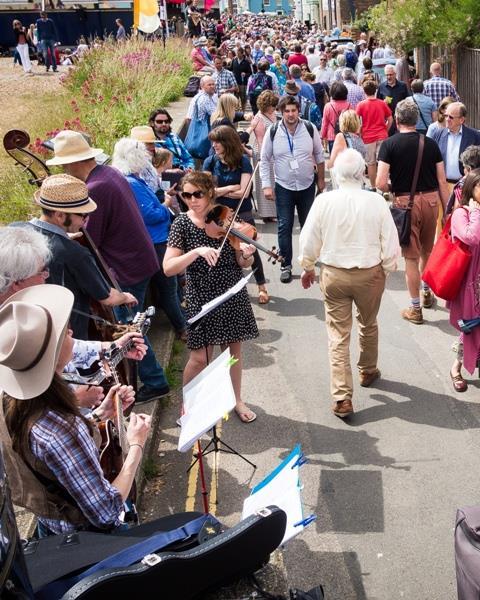 If I were to choose an ideal location for playing string quartets, it would probably be a quiet and spacious room with bright lighting and a good acoustic. There certainly wouldn’t be any loud music playing, or wind blowing, or people cheering and stamping: that would ruin the ambiance of, say, Dvorák’s ‘American’ Quartet, completely.

Nevertheless, this June my quartet made its way to the Aldeburgh Festival to take part in John Cage’s ‘Musicircus’. The idea, conceived in the late 1960s, is to have as many performances as possible going on within a limited space, with every performer fighting for attention from a wandering audience. In Cage’s words: ‘You won’t hear a thing – you’ll hear everything.’ Hundreds of musicians joined in, from local amateur groups to members of the City of Birmingham Symphony Orchestra and European Chamber Orchestra. Folk groups, cello bands, solo instrumentalists and more populated shops, sheds, balconies and hidden rooms all along the sea front.

We were presented with a musical challenge unlike any we had experienced before. Throughout the morning, we played parts of the ‘American’ firstly in a beachside shelter, then in a garage and finally on the tarmac in front of Aldeburgh’s tiny seafront Moot Hall. In the first slot, we could hardly hear each other. The wind tore the clothes-pegged music from our stands and the neighbouring brass band was a merciless stage companion. Next we found ourselves cooped in a garage with the festival director, pianist Pierre-Laurent Aimard, contributing sudden, unexpected fortissimo discords on an upright piano. I doubt the Dvorák has ever sounded so sinister.

As we battled through each performance, elements of our playing began to change. When we rehearse in a quiet room, we listen to each other and respond instinctively to each other's musical gestures. We are not good at using body language to communicate. Here there was no alternative: our eye contact began to improve, as did our awareness of each other’s physical gestures. Through necessity, these gestures themselves became more pronounced – our leads had more purpose and our bow synchrony increased. Keeping a sense of ensemble required immense concentration. We stood in a tight circle, listening as hard as we could to the players either side of us, but I had to rely on the second violinist and cellist to connect me to the viola player. For extended time periods, none of us could hear all three companions at once.

The experience raised questions as to how we rehearse. Should we spend more time challenging ourselves by exploring uncharted territory and testing our ability to perform in a variety of situations? Removing one faculty – in this case hearing – forces us to rely on others in a way we have never before found necessary. We have to think harder about communicating with our colleagues, about accurate placement of our hands, about the theoretical, physical commands we need to give our instruments to make them respond in the way we imagine in our heads, because we cannot rely on our ears. It is a similar idea to when quartet coaches ask their students to close their eyes and try playing using only their ears, to help them to concentrate single-mindedly on their unity of sound.

Of course, ordinarily we would never dream of performing without being able to hear one another or ourselves – the idea is preposterous and self-defeating. But as an exercise, doing something seemingly ridiculous can highlight weaknesses that we might not even realise we have. That way, when we return to normality, perhaps we will have a greater understanding of the whole.

Back at Aldeburgh, our third performance returned us to the seafront, where we had to compete with more seaside wind and a bongo band. This time, despite the deafening bongo rhythms, we felt more secure: in only a short space of time our awareness had increased enough to make the task easier than it had been first time round. We had been given a gruelling lesson in ensemble playing. It was an incredible feeling when suddenly, for the last page of the piece, the other musicians finished playing and everyone listened to us, our senses restored and heightened, as we careered to the end.