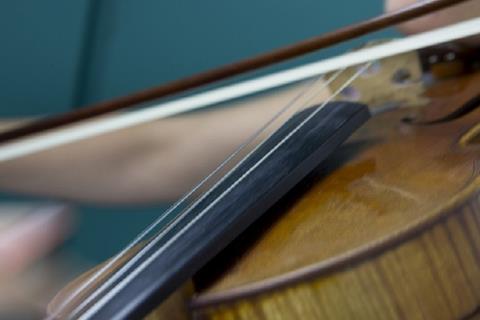 Bruno Giuranna:  I inform my students that one of my constitutional rights is to be able to see in front of me someone bowing straight with the whole bow, from frog to tip. I encourage the use of two mirrors when practising. Bow not straight? No lesson. The results are exceptional.

Mimi Zweig:  For initial quick progress, I use the martelé stroke. The bow is the most important component of what we do, and the martelé stroke gives the student the possibility to understand how to push and pull the string, keeping the awareness of its three dimensions. On the down bow we envision pulling the string from the left side and on the up bow we imagine pushing the string, allowing for the maximum amount of vibration. The martelé stroke is introduced to beginners in the first lessons with the bow in a preparatory piece for Twinkle, Twinkle Little Star: A–E–A–rest; A–E–A–rest. The martelé is played in the upper half of the bow, releasing the forearm. The student listens for the ring and has the sense that the work happens on the beginning of the note and the rest of the note is a given. We will later introduce slurs, initially with martelé, and a two-octave G major scale playing two, three, four, five, six, seven, eight and finally fifteen notes per bow.

Read: 7 warming up and cooling down exercises for musicians