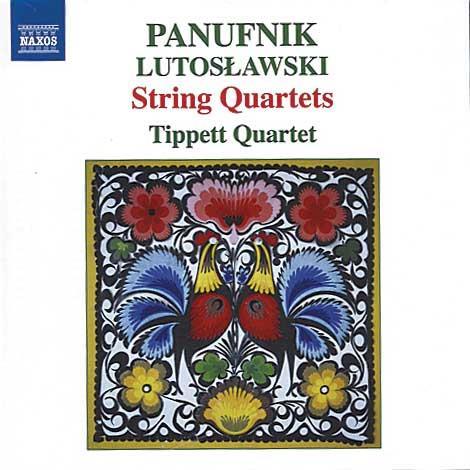 A striking aspect of the iridescent sound world of Lutoslawski’s String Quartet, given the high degree of aleatoric freedom involved – within episodes, individual gestures are left deliberately uncoordinated – is how interpretations converge. The pitches and moods are free of expressive labels, in continual flux yet pursuing the most satisfying kind of argument. This is a well-prepared and beautifully engineered new recording by the members of the Tippett Quartet, although it already has some serious rivals on disc. The Arditti and LaSalle number among them, but the veteran Silesian Quartet gives the most dramatically compelling alternative in its 2005 recording (Polish Radio Katowice), demonstrating a tauter approach and less etiolated tonal spread.

The Tippett Quartet’s expansive tempos and wider vibrato pay dividends in Andrzej Panufnik’s three quartets, where a degree of Romantic intensity is more apt. This is especially true in the brief but poignant Third, written the year before he died in 1991, which arrives at the kind of hymn-like splendour that made his Sinfonia Sacra so popular for years. The First (1976–7) and Second (1980) are tougher nuts, though full of aching and confrontational dialogue in the great tradition of quartet writing. The coupling is unique on disc yet makes perfect sense: do hear it.