Overtones and resonance: why stringed instruments allow you to feel the music

When physicist and engineer Keith Williams began learning the cello, he was able to feel for the first time theoretical sound waves and vibrations 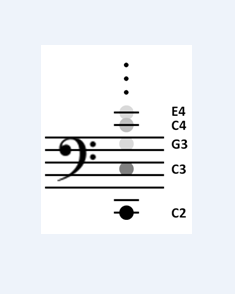 I first played the cello on a visit to see my dear friend and luthier, Oded Kishony. His charming little shop occupies the lower level of his home in the woods near Barboursville, Virginia. There, Kishony is visited by customers, owls, hawks, foxes and deer… and a certain physicist who likes to ogle the instruments and talk about music and science.

On this visit, I found myself with a cello clasped between my knees, tenuously sliding the bow across the strings and eliciting the high-pitched squeaks of a starving mosquito, attacking the ears as if probing for a vein. Kishony endured a few tones and shrieking harmonics, before taking the bow in his hand and boldly drawing it across the strings with firm conviction. The instrument responded with sustained, respectful resonance, like an obedient choir at the command of its conductor. ‘You have to be firm with it,’ he admonished. Then he related a curious analogy from renowned cellist Stephen Kates: ‘It’s like stirring a pot of cold molasses- slow, with lots of pressure’.

I was soon stirring cold molasses at home, with my own cello, and feeling that resonance reinforced in my chest, pressing on my heart and throughout my body… like an extension of my own voice. It sounded and felt amazing… and also fascinated me, as a scientist and engineer. I have played piano competently for years, but with the cello, I quickly discovered that I could experience music anew. I was soon seeing, hearing, and feeling many new things for the first time. I felt the cello; the whole room responded to it. Windows vibrated; my piano vibrated; even a vase on a coffee table in the next room sang along. The instrument engaged with everything surrounding it.

One of my biggest surprises, while learning the cello, is that even the individual open-string notes sound more like a chorus, providing a full and complex sound.  Imagine if we tried to capture this effect with the standard nomenclature! I suppose that it might look something like the picture on the right. The C2 note that we expect from the lowest, open string is accompanied by numerous, audible overtones. We write a single note, but when we actually play that note, we hear a soloist backed by an infinite choir of angels, with higher and higher voices. We also feel many inaudible modes; these, of course, contribute to the uniquely tactile experience of playing the instrument.

My first experiences with the cello reminded me of the Pythagoreans… the society that bequeathed the famous theorem.  Unbeknownst to many, the Pythagoreans were far more than a group of geometricians who reclined in their togas, carving profound formulas into tablets. They were a musical society of mathematikoi and akousmatikoi, who together explored, with their music and reason, some of the most important logic underlying modern mathematics.

The Pythagoreans’ stringed instrument of choice was probably the kithara – a resonant frame supporting taut gut strings. I gather that the kithara was a sort of deluxe lyre, offering many new musical possibilities and fine resonance. Surely the Pythagoreans, with their lyres and kitharas, discovered sympathy between adjacent strings of one instrument… and also between nearby instruments. They must have observed action-at-a-distance: one instrument responding to another, as if the distant string were plucked by an invisible hand. That would have been quite a mystical experience, particularly since they didn’t know much about the underlying physics of sound. Aristotle made his conjectures about compressions and rarefactions several centuries later, and there was no complete theory of sound for almost 2000 years after that.

The sympathies between instruments almost certainly would have motivated the Pythagoreans to tune their instruments together, to maximize the effect – perhaps producing the first symphony of sound. They also famously explored harmonies and harmonics, thereby discovering certain ‘harmonious’ ratios; eg the ratio 1:2 associated with a half string harmonic. If I had lived in their time, I’m certain that I would’ve participated with great enthusiasm!

My own version of a modern Pythagorean society will reassemble this autumn at the University of Virginia. There, in my introductory engineering courses, students will learn how to bring together materials, science, acoustics, data analysis computer-aided design, 3D printing, and of course music- with their own prototype instruments as their learning platform. Along with Oded Kishony and his fellow experimentalist and inventor Bob Hoffman, I will use violins and cellos to explore what the imagination can build when science, engineering and art are brought into harmony.

Keith Williams is a visiting professor in the Department of Electrical and Computer Engineering and a Lecturer in the Department of Engineering in Society at the University of Virginia. He is also a programme manager and CTO for the R&D contractor Leidos, based at the Naval Research Laboratory in Washington, DC. Williams is currently preparing the manuscript for a book on his experiences with the cello, tentatively titled 'Cello Lessons: A Physicist Learns to Play'. Luthier Oded Kishony’s shop is in Barboursville, Virginia; his website is kishonyviolins.com