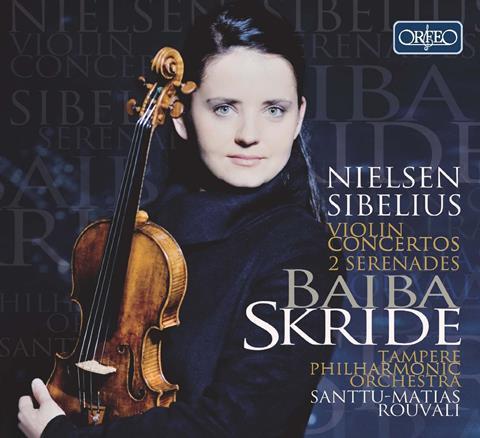 Sibelius’s Violin Concerto offers a great variety of interpretative possibilities (see this month’s article), and in this release the Tampere Philharmonic, under its chief conductor Santtu-Matias Rouvali (who turned 30 on 5 November) is key in highlighting its Finnish colouring – thanks to its woody strings, declamatory brass and dreamy but occasionally tart wind playing.

Baiba Skride’s playing here, and in the Nielsen Concerto, is characterised by a tone that is inherently and unfailingly beautiful. She gets to the core of every note without extraneous surface noise, and her vibrato is so integrated with the tonal colouring that you hardly notice it. On the other hand, it’s not the boldest playing in terms of Romantic gestures and grand climaxes. You don’t get showy display in the outer movements of the Sibelius, nor any of the high-bow-pressure emoting common in the central Adagio, but the expression is always honest and compelling.

For some, Skride’s approach will seem better suited to the more neo-Classical Nielsen, to which she brings a tensile strength in terms of both sound and structure. The folk-coloured passages are as convincing as her brilliance and control in the work’s three cadenzas. As in the Two Serenades, a nice inclusion, you might just occasionally wish Skride would go for more effect – but there’s no question that this is exceptional playing and music making.