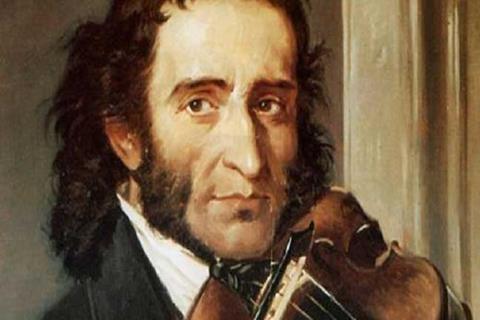 Niccolò Paganini was born in Genoa, Italy, Oct 27, 1782 and is considered by many to be one of the greatest violinists of all time. The young musician first received lessons from his father and later from the most reputable teachers in Genoa. In 1801 Paganini travelled to Lucca in Tuscany and in 1805 he was appointed to the position of court solo violinist by Napoleon's sister Elisa Bacciocchi. After four years in Lucca Nicolo left the court and began performing his own music at concerts throughout Italy. It was not until 1828 that Paganini made his first professional appearances outside Italy when he embarked on a six-and-a-half year tour that started in Vienna and ended in Paris in September 1834. Stories of Paganini's performances are legendary, with audiences said to have been moved to tears and hysteria. His astonishing technical ability led many to believe that his mother had sold his soul to the devil in return for a career as the greatest virtuoso in the world. Paganini garnered great personal wealth but he was known for his excessive gambling that at one point forced him to pawn his own violin. By the mid-1830s Paganini's health and ability began to fail and he died in May 1840 from internal hemorrhaging before a priest could be summoned. This added to suspicions that he had entered a pact with the devil and the Church denied his body a Catholic burial in Genoa. It was not until 1876 that his remains were finally laid to rest in a cemetery in Parma.