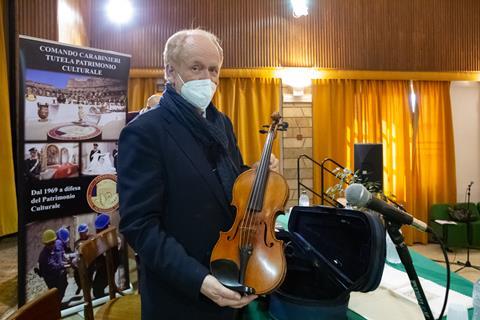 At a ceremony held on 8 April, a precious violin by Giuseppe Rocca was returned to the Alessandro Scarlatti Conservatory, having been missing for several decades.

Between the late nineties and early 2000s, 26 instruments were stolen from the conservatory in Palermo, including the 1861 Giuseppe Rocca violin. The violin was protected by the Code of Cultural Heritage and Landscape and owned by the state. The violin was among four other instruments to be recovered so far.

Police commander Gianluigi Marmora returned the Giuseppe Rocca violin to the conservatory’s director Daniele Ficola, who had been searching for the instruments since 2012. The ceremony took place in the presence of the president of the conservatory, Mario Barbagallo, the curator of the musical instruments section of the Rijksmuseum in Amsterdam, Giovanni Paolo Di Stefano and the director of the Pietro Mascagni Institute of Music in Livorno, Renato Meucci.

Meucci was responsible for photographing the conservatory’s collection of instruments in the nineties, which proved to be crucial in the recovery of the violin. Lengthy investigations pieced together the violin’s journey since the theft, including details of a sale between private parties in Germany in 2007, as well as seizure of the instrument from a a professional violinist working in Sicily in 2020.

The violin’s confiscation and return to the conservatory was ordered this year, following technical investigations carried out by a team of international experts and luthiers.

Giuseppe Rocca (1807-1865) was born in Barbaresco and worked in Turin to work in the shop of Giovanni Francesco Pressenda from 1834. After meeting instrument collector Luigi Tarisio, Rocca’s instruments show influence from the Stradivari ‘Messiah’ and ‘Alard’ Guarneri del Gesù violins, which were in Tarisio’s possession at the time.