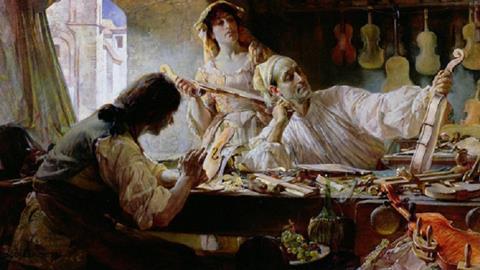 New research published in Proceedings of the National Academy of Sciences of the United States of America (PNAS) suggests that a special chemical treatment of the maple used by Stradivarius and other Cremonese makers may account for the unique sound of their instruments.

Researchers from the National Taiwan University – led by Hwan-Ching Tai from the Department of Chemistry and including Chi Mei Museum curator Dai-Ting Chung and Stradivari varnish expert Brigitte Brandmair – detected evidence of the mineral treatment in maple samples removed from four Stradivari violins and cellos, plus one Guarneri 'del Gesù' violin, when compared with modern instruments. The team used a combination of five analytical methods: NMR, synchrotron X-ray, DSC, TGA, and ICP-MS.

The scientists also observed: 'His maple appeared to be transformed by aging and vibration, resulting in a unique composite material unavailable to modern makers.'

The researchers have recommended further investigation in this field, however, concluding: 'Additional antique instruments from Cremona and other Italian cities need to be analysed to elucidate if there were unique wood properties associated with Cremonese makers or Stradivari himself.'

Image: a fictionalised 1893 painting of Stradivari by Edgar Bundy