Eldbjørg Hemsing receives the 1707 ‘Rivaz, Baron Gutmann’ while Janine Jansen has the 1715 ‘Rode, Duke of Cambridge’ 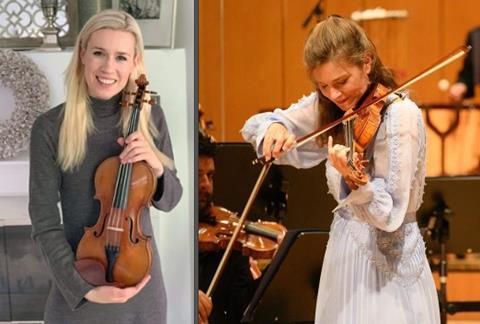 Two of the world’s leading female violinists have been granted the use of ‘golden period’ Stradivari violins. Norwegian soloist Eldbjørg Hemsing is now playing the 1707 ‘Rivaz, Baron Gutmann’ Stradivari violin, owned by the Dextra Musica foundation. Its most recent player, Janine Jansen, has been gifted the use of the 1715 ‘Rode, Duke of Cambridge’ Stradivari, courtesy of a European benefactor.

‘I want to thank Dextra Musica for having given me the fantastic opportunity to play on one of the finest Stradivari violins for these past years,’ said Jansen. ‘The velvety beauty, depth and richness of sound have been a true inspiration for me. I wish Eldbjørg Hemsing and the “Rivaz, Baron Gutmann” a wonderful journey together.’

‘Being part of the Dextra Musica family for over twelve years, I am thrilled and grateful to continue expanding this fruitful collaboration,’ said Hemsing. ‘Having the support of a foundation loaning me this incredible violin, one of the world’s finest, is truly a honour as well as a huge artistic inspiration. I am very much looking forward to continue building the artistic legacy of the instrument as well as inspiring audiences with its sound.’

Read: From the Archive: the ‘Pierre Rode’ Stradivarius violin, 1715

According to John Dilworth, the ‘Rivaz, Baron Gutmann’ is ‘a powerful instrument, made on Stradivari’s “PG2 mould from a beautiful single piece of deeply figured maple, with the top marked with an unusually prominent hazel figure on the bass side. The rich varnish is remarkably intact, and the instrument is altogether a remarkable example of Stradivari’s mature period.’ The instrument is one of twelve featured in The Strad Calendar 2021, together with examples by Guarneri ‘del Gesù’, Guadagnini, Rugeri, Rogeri, Lupot and many more.

Made just six years later, the ‘Rode, Duke of Cambridge’ is another fine Stradivari which was formerly the principal performing instrument of the US violinist Oscar Shumsky. He bought the violin from Emil Herrmann who described the violin as follows: ‘The back is in one piece of handsome maple or broad curl, the scroll and sides of somewhat plainer figure. The top is of choice spruce of medium grain. The varnish is an orange red colour.’ 1715 was indeed a golden year for Stradivarius, who in addition to the ‘Pierre Rode’, made the ‘Alard’, ‘Cremonese’ and the ‘Emperor’ among others.

Oscar Shumsky wrote of the events that led to his acquiring the ‘Pierre Rode’: ‘It was a case of ‘love at first sound’…I had been through many Guadagninis and some lesser Strads, but always came away disappointed. Then on one of my innumerable visits to the atelier Emil Hermann, I spotted a violin lying on the long felt-covered table. A quick glance told me that the violin was not only a Stradivarius, but one of the finest examples I had seen. After trying a few passages from different fragments of the repertory I just knew I had to have it!’