Documentary about Christopher Nupen to air on 3 October

’Listening Through The Lens’ profiles the work of groundbreaking music documentary maker Christopher Nupen, with insights from leading musicians and broadcasters 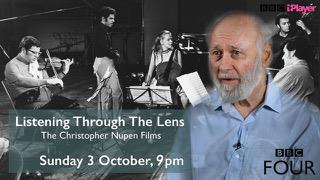 A feature-length documentary about the pioneering film director Christopher Nupen will air on Sunday 3 October on BBC Four.

Listening Through The Lens will showcase some of Nupen’s acclaimed work from 1966 to 2017. Now 86, Nupen reflects on over 75 productions about musicians and composers, spanning more than 50 years. He is joined by leading figures in music including Daniel Barenboim, Vladimir Ashkenazy, Daniil Trifonov, John Williams, Evgeny Kissin and Pinchas Zukerman, as well as broadcasting legends David Attenborough, David Elstein, Michael Grade and Melvyn Bragg, who share their insight of a unique chapter in the history of music on television.

Nupen founded one of the first independent television production companies in the 1960s, at the dawn of the music documentary era. Seizing upon the emerging silent camera technology and his unique access to a golden generation of artists, he filmed classical music in a new and intimate way. At the start of his career, he blended documentary and musical performance, filming musicians at close quarters on stage, in their natural environment, where they have most to offer. The effects were claimed to have brought countless numbers of people to music for the first time, breaking down the barriers between musicians and the wider public.

A musician himself, Nupen’s musical friends were among the most-renowned artists of the 20th and 21st century. As his experience grew, he tackled musical ideas and the lives of the great composers such as Schubert, Sibelius, Paganini, Tchaikovsky and Brahms.

The Oxford philosopher and historian, Sir Isaiah Berlin, described Nupen’s films as being “at just about the highest-level which television is capable of reaching”.

Listening Through The Lens will be shown on BBC Four at 9pm, Sunday 3 October. Watch the trailer here: