Brett Yang of TwoSet Violin to take a break 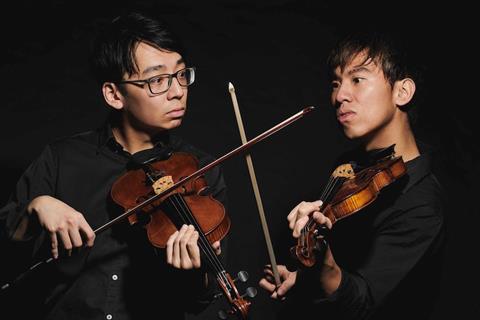 Eddy Chen, half of the comedy duo that makes up TwoSet Violin, has revealed that his comedy partner Brett Yang is to take a break due to health reasons.

In a YouTube video, Chen says ‘Brett is the type of guy to push himself to do things, so he would be like ”I’m ok to film”, and I guess that was too much because recently we did the Blind Dating Musicians video. Brett wasn’t feeling too well but I think both of us underestimated his condition. After filming that video he was not feeling well at all.

‘As to what his condition is….the diagnosis and prognosis are still not 100 percent clear but what he has is not life-threatening, so he will recover…It does seem like the best thing would be for him to take some extended time off, which is ironic because I can’t remember the last time we’ve taken a holiday for over a week.

‘I’ll still be working with the team but I’ll also be thinking about how to look after my own health. Hopefully, if everything is fine, Brett will be feeling better and we will return to making videos. It’s just uncertain at this point how long this will take. It could be two weeks. It could be a couple of months.’

To watch the video, see below.