20,000 bees have been encouraged to make a hive inside a cello in order to create a musical soundscape 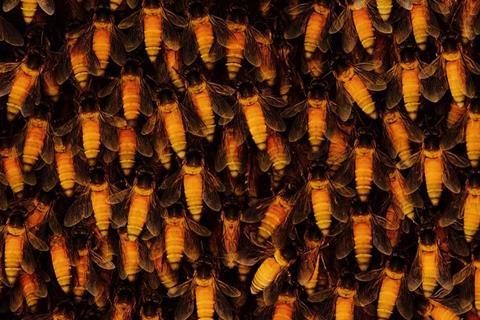 A swarm of 20,000 bees has been encouraged to set up a hive in a reclaimed cello.

The cello, which is tuned to the key of C, is currently installed in a West Bridgford garden belonging to Martin Bencsik, a professor from Nottingham Trent University, who is researching the sounds and vibrations made by bees.

The resulting noises are being collected and recorded in order to create a musical soundscape, which will contribute to a musical performance later this year.

Dr Bencsik, whose wife is a professional cellist and whose father was a beekeeper, told the BBC: ‘We hope people will find it beautiful and convey the message they need to be looked after.’

He also hopes, with the project, to raise awareness about the decline of the species. ‘We have run out of enough hollow trees in this country for the bees to make a good living and it feels like a sacrifice to give honey bees such a beautiful, splendid object for them to develop,’ he said.

‘When we put the bees in the cello they all crawl up to the very top and they start building their structure, the honeycomb from the top, and they work their way down. In fact, in the last six days you can see a very large section of honeycomb here that has been built and within a few weeks the entire cello will be full of honeycomb.’