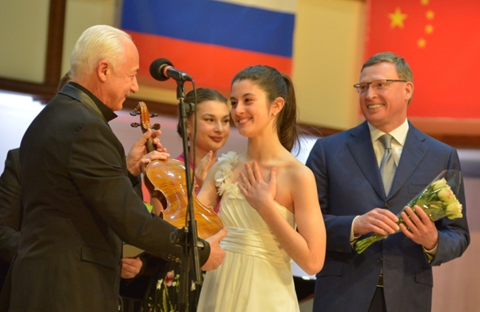 The competition, open to violinists aged 15 to 25, ended in a concerto final with the Omsk Academic Symphony Orchestra conducted by Dmitry Vasilyev.

Dueñas performed the first Paganini concerto and, according to statement released by the competition, the jury was unanimous in awarding her top place. The prize is an 1890 violin by the Venetian maker Eugenio Degani, reportedly worth 2,485,000 rubles (c.$39,000).

Second pace was won by Fedor Beznosikov from Russia, while the third place was shared by Aimee Vakui (Japan) and Yun Tang (China).

The junior section of the competition shared its first place between 13-year-old Varvara Agayeva from Russia and 13-year-old Wong Pui Ying from China.

Dueñas studied with Noemí Segura and Annika Berscheid before entering the class of Igor Malinovsky at the Hochschule für Musik Carl Maria von Weber in Dresden in 2014. Since 2016 she lives with her family in Vienna and studies with Boris Kuschnir.

Among a number of competition successes, last year Dueñas won her age-group category at the Zhuhai International Mozart Competition for Young Musicians. She has been playing a Nicolò Gagliano violin on loan to her since winning the 2016 German Musical Instrument Fund, the Deutsche Stiftung Musikleben.