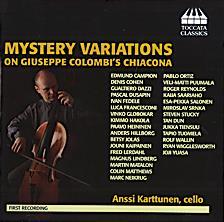 In this composite work written to celebrate the 50th birthday in 2010 of Anssi Karttunen, 30 composers have each contributed a variation on the Chiacona by Giuseppe Colombi (1635–94). The title ‘Mystery Variations’ reflects the fact that the composers had no knowledge of who else was contributing, and that Karttunen had agreed to play the set before he knew the roster himself.

It’s a testament to Karttunen’s vast repertoire that so many composers with whom he has worked are represented here, and there are some surprises, including the young Brit Ryan Wigglesworth, American composer and theorist Fred Lerdahl and Argentinean MartinuMatalon. His fellow Nordics include the Finns Esa-Pekka Salonen, Magnus Lindberg (who closes the set), Kaija Saariaho, Jukka Tiensuu and Paavo Heininen, and the Swede Anders Hillborg.

The variety here is mind-boggling – from Matalon’s waspish, steely coloured ‘Polvo’ (Dust), employing a metal mute, to Tan Dun’s largely strummed offering in which the word ‘chaconne’ is declaimed; and from Vinko Globokar’s left-hand-only ‘Idée fixe’ (also with vocal intervention) to Colin Matthews’s ‘Drammatico’, which includes a low rumbling electronic part. The recording quality is exemplary and Karttunen’s virtuosity and versatility are clearly on show, but so too is his shining, beautifully clean tone. A must for anyone curious to hear what 30 modern minds can subject a cello to.