Music by the sea: Postcard from Cornwall

The annual series of masterclasses held in the spectacular setting of Cornwall’s Prussia Cove celebrates its 50th anniversary this year. Rita Fernandes explores its welcoming and nurturing atmosphere 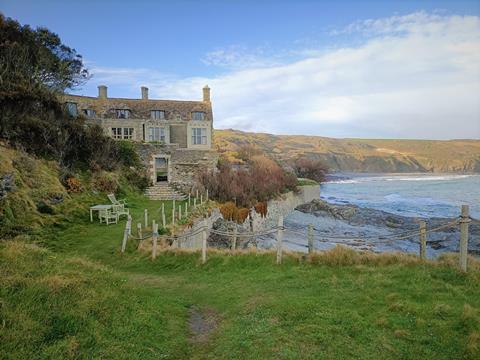 Created by the weathering of rocks from thrashing waves, a cove is the result of thousands of years of erosion. Small, sheltered inlets are consequently formed, making for what we today use as beaches and paths, or in the case of International Musicians Seminar (IMS) Prussia Cove, the location for a three-week series of masterclasses, which have been held in the south-west of the Cornish peninsula every spring since 1972.

The idea for IMS Prussia Cove was born during a 1971 concert trip to Truro by Hungarian violinist Sándor Végh. There he met the violinist Hilary Tunstall-Behrens whose family owned an estate there named Porth-en-Alls. Végh decided that the residence, with its picturesque and sheltered coastal location, would be the ideal place to run musical seminars. On the proviso that Tunstall-Behrens took care of the organisation, Végh offered to teach there. And so began 50 years of alumni turned tutors, all constantly inspired by IMS Prussia Cove’s landscape and musical lineage. And just like the surrounding cove, the masterclasses feel intimate and welcoming, all the while being integrated into the international musical world. No better was this encapsulated than by IMS Prussia Cove former student and current tutor Thomas Adès about his own IMS teacher, György Kurtág: ‘When I told him I was off to IMS Prussia Cove, he said, “Say hello to the rocks!”’

Various initiatives will take place this year to celebrate IMS Prussia Cove’s 50th year. Local luthier Mark Jennings, who has worked with IMS for more than ten years, is creating a quartet of instruments to be played in the autumn. For the duration of the masterclasses, Jennings set up shop on the residence’s first floor. When he wasn’t working on the new instruments, he explained that he enjoyed watching the students play. The fiftieth-year celebrations also include a six-part podcast series, a commission for a new chamber work by Thomas Adès, an exhibition of the organisation’s historical archives, and the sale of paintings by the late artist Romi Behrens of IMS Prussia Cove.

The beautiful cacophony of twelve student cellists vibrating at different speeds is incredibly intense, and yet joyous

As I arrive, the residence’s main house, which overlooks the awe-inspiring coastal landscape, comes into view. The house is surrounded by grass, with wooden benches and tables scattered throughout its gardens. Inside, the spaces where the masterclasses are held double up as living rooms for the other 49 weeks of the year, and have a cosy, informal feel with their jumble of chairs and couches of different sizes and colours. Students eagerly listen, following their scores, or gaze out of the windows overlooking the vast cove. Coffee in hand, I enter a cello masterclass, where I spot a familiar-looking portrait on the wall. I ask the student next to me who the subject is. Looking slightly perplexed, almost insulted, he whispers, ‘It’s Sándor Végh!’ As I focus back on the masterclass, I keep the student’s tone in mind. It is clear the sense of lineage here is stronger than ever.

Led by American cellist Steven Doane, the masterclass on Bach’s Sonata no.2 BWV1028 concentrates on the young player’s breathing and phrasing. At points the tutor asks for the audience’s thoughts on how she has improved since playing the piece the day before. This creates a sense of shared, rather than one-directional, learning. The evening ends with an opportunity to see the mentors in action during a concert at the Parish Church of King Charles the Martyr in Falmouth.

Next morning, I am greeted by the noise of chattering students leaving the dining hall. Making my way to the schedule, pinned on the wall and full of scribbled edits, I ask two cellists which masterclass they would recommend. They both point to Dutch–American violinist Stephen Waarts’s masterclass with Adès, where he will be playing the composer’s Violin Concerto.

After a stint in the cello masterclass, I move to the Long Room, which is crammed with excited students, helpers and staff, sitting and standing. Waarts’s first run-through is hesitant, and he often looks at the composer while playing. But when they start to work on the piece, which Adès describes as ‘Olympic level’, it begins to feel more like a rehearsal than a masterclass. From the piano, Adès guides Waarts through the concerto and even changes certain markings to match Waarts’s interpretation. It is humbling to see the ease of interaction between these two generations of IMS players and perfectly illustrates something IMS Prussia Cove alumnus and first-time violin tutor Anthony Marwood tells me the following day: ‘The magic of this place is that you can be yourself. It’s a safe space, and there is no dogmatic style of teaching.’ Jovial drinks and a Sunday roast with the programme’s helpers end my day, and I am excited to see what tomorrow will bring. 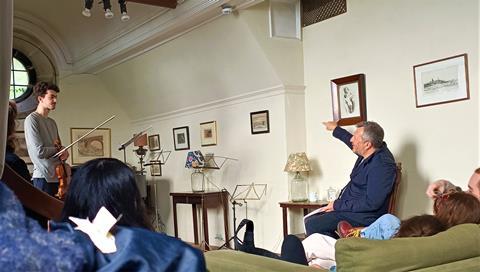 Violinist Stephen Waarts in a masterclass with composer Thomas Adès

Perhaps the most touching performance of my stay is the Echéa Quartet’s masterclass on Mendelssohn’s String Quartet op.44 no.3. The performance is all one could hope for with Mendelssohn – a sense of fundamental purity with a vivacious, youthful energy. ‘Prussia Cove is the perfect place to play 19th-century music,’ Adès, the ensemble’s tutor, says. ‘The composers of the era didn’t have our technology, and they had landscapes like these. It’s what they knew.’

After lunch, I hear chatter about an impromptu cello technique session so I decide to attend. By the time I arrive, couches have been pushed to the room’s edges to make space for the twelve cellists. Led by Doane, they work on various exercises, at one point all playing vibrato simultaneously. The beautiful cacophony of twelve student cellists vibrating at different speeds is incredibly intense, and yet joyous. It is a pleasure to watch them all revel in their shared love for the instrument. The evening would see a selection of the seminar’s students perform their works. Although I had to leave before the end of the concert to catch my train, it is the sound of the students’ wild applause for their peers that ended my stay.

The seven-and-a-half-hour journey on the sleeper train from Penzance to London feels like a fitting time to readjust to busy city life. Time seems to stand still in Prussia Cove. Its magnificent natural setting trumps any sense of superficial distraction, and the masterclasses’ strong sense of artistic lineage makes one feel at the centre of the musical world. Not only will I remember my time fondly from a personal point of view, but my three days at IMS Prussia Cove have given me faith that the future of classical music is in talented, and most importantly, friendly and humble hands.