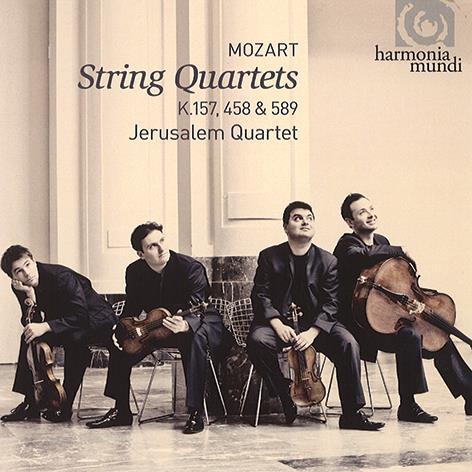 For this sublime disc the Jerusalem Quartet chooses one ‘Italian’ work, one ‘Haydn’ and one ‘Prussian’. The playing in the three-movement early piece is alert and very beautiful: the wistful Andante is touchingly done, at a plausible tempo.

The ‘Hunt’ opens with an easy spring to its step and, although the playing is never tense, the attention is held through all Mozart’s repeats. The minuet is quite easy-paced, with an enjoyably strutting trio; the Adagio is most profoundly played; and the finale is lively.

The later B flat major Quartet displays lovely tone from the start: vibrato is never overdone but at the other extreme, there is none of the starkness that mars some of the Hagen Quartet’s more recent Mozart. In the main theme of the Larghetto, the Israelis avoid the unmusical Neue Mozart Ausgabe version. Again they find an agreeably easeful tempo for the minuet, with a delightful trio. The carefree finale is playfully despatched.

I can think of versions of the ‘Hunt’ that match this one, but the performance of K589 is the best since the old Boskovsky (Decca). Generous with repeats and sympathetically recorded, this CD sends violist Amichai Grosz off to the Berlin Philharmonic on a considerable high.