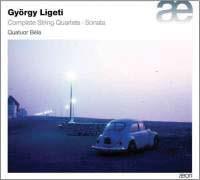 The four young French players of the Béla Quartet make great play of the unbridled fantasy and mischievous humour in Ligeti’s music in their introductory booklet notes to this enjoyable release, so it comes as a bit of a surprise that their performances aren’t more fantastical themselves. The players clearly have Ligeti’s two quartets in their blood – the astonishingly tricky Second Quartet was their founding piece – and they turn in beautifully etched, good-natured performances of impeccable cleanliness, which still somehow overlook the turbulent strangeness of the composer’s creations.

Their First Quartet is vivid and likeable, and its technical demands are dispatched with effortless ease, but the Béla players seem too polite to dwell on its sinister, even deranged passages. It flies by in a whirr of colour and character, however, with each voice given a clear sense of purpose.

That clarity is present, too, in the Béla’s remarkably transparent account of the Second Quartet, but it sometimes counts against them: in Ligeti’s clouds of micropolyphony, for example, or the obsessive tickings of the famous third movement, each part is delivered with such vivid lucidity that the texture struggles to come together.

Cellist Luc Dedreuil delivers the early Sonata for solo cello with energy and passion, and recorded sound is clear and warm throughout.