Why do violin bridges have a waist?

In this extract from his investigation of the acoustical role of the violin bridge, Joseph Curtin sets up an experiment with a waistless prototype 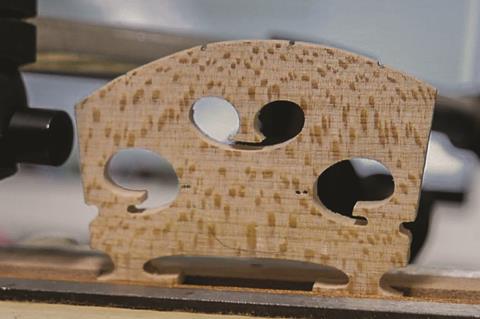 The experimental bridge with uncut slots in the waist

The bridge and soundpost are ground zero for set-up. Where the post is a simple, timeless design – a spruce rod whose important parameters are mainly its length and position, the bridge is a complex structure whose design has changed dramatically over the centuries, and whose important parameters are, after several decades of scientific research, only now becoming clear.

If one were to ignore tradition and set about designing a violin bridge from scratch, there is no obvious reason to cut a slot in each side of it. The resulting reduction in stiffness makes the bridge more prone to warping, and also allows the treble side to sink over time due to the greater tension on the E-string side. Why, then, are waists universal on bridges from all periods?

We did a simple experiment at the 2017 VSA/Oberlin Acoustics Workshop: a set of bridges were milled from a single block of maple, but with the slot in the waist left uncut. This gave the bridges the approximate lateral stiffness of one with no waist at all. After fitting them to five violins, acoustical measurements were taken. The slots were then cut, and the instruments re-measured.

My assumption was that the stiffness of the uncut waist would result in greater treble output. The graph below shows how wrong I was. Opening the waist actually increased radiation in the 1–7kHz range. Gains were modest – but if brilliance and power are the goal, a waist seems a step in the right direction. 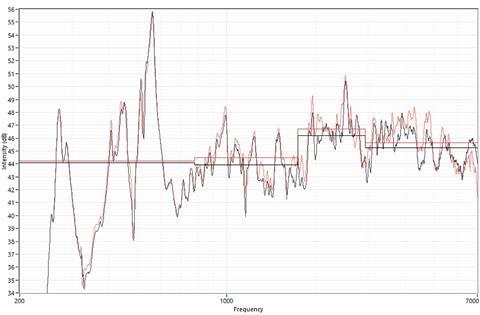 To read the full article from the November 2019 issue of The Strad, in which Joseph Curtin investigates the acoustical role of the violin bridge and the interconnected relationships between mass, frequency and resonance, click here to log in/subscribe, or purchase the digital magazine or print edition