In this extract from September 2017, Harry Mairson introduces the ’Digital Amati’ software used in conjunction with Euclidean geometry to design string instruments 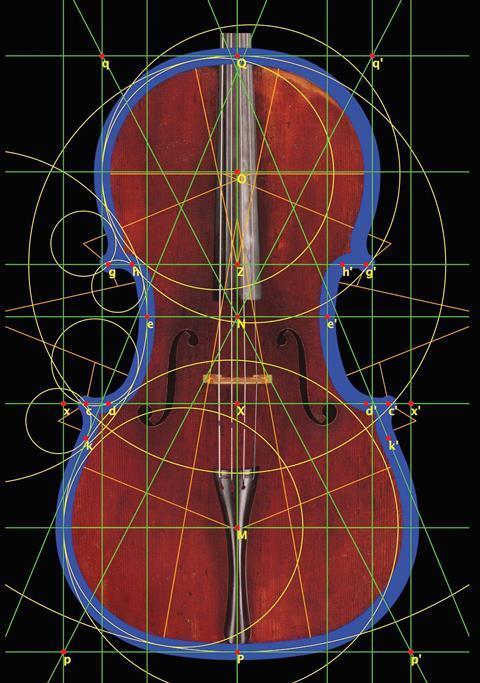 The following extract is from the article ’Project Lutherie: Euclidean geometry and digital instrument design’ which appeared in the September 2017 issue. To read the full article, click here

For several years now, makers of violin-family instruments have been finding new and different ways of incorporating 21st-century science into an age-old craft. CT scanning, fine acoustic measurements and progress in wood technology have all played their part in advancing the art of the luthier but, so far, the possibilities offered by computer science have been relatively unexplored. A new software project, which has been in development since 2012, seeks both to aid makers in designing classical stringed instruments, and to help researchers in their understanding of stringed-instrument forms.

In just the past few years, the so-called ‘Digital Amati’ software has been utilised in a number of innovative ways. I used it to design a version of the 1700 ‘Cristiani, Stauffer’ Stradivari cello, scaling the instrument down proportionally from its original 770mm length and 417mm stop, to 740mm and 400mm respectively; we discovered that reducing it in this fashion resulted in most dimensions (except the lower bout length) ending up similar to those of Stradivari’s later B-form models.

At the 2015 Oberlin violin making workshop we used CNC technology from this redesign to produce commensurate internal forms; versions of this reduced-size Stradivari have now been made by at least five of the participants that year, including myself. A year later, the software was used in the design of the ‘Obiealto’ viola (The Strad, November 2016), where I assisted the Oberlin makers in experimenting quickly with numerous variants in the viola form.

US maker Kevin Kelly (who has written about the use of computer software in The Strad’s Trade Secrets section) now uses Digital Amati for all his design work, allowing him to do in an hour what used to take a day. Joey Naeger of Houston has also been using it for the past few years; I am pleased to say that instruments made by both of them won awards at the 2016 Violin Society of America makers’ competition. Naeger is now collaborating with Robert Brewer Young on a new design based on a Girolamo Amati II double bass, expanding the possibilities of this software still further.