The Strad poster: the 1741 ‘Vieuxtemps’ Guarneri 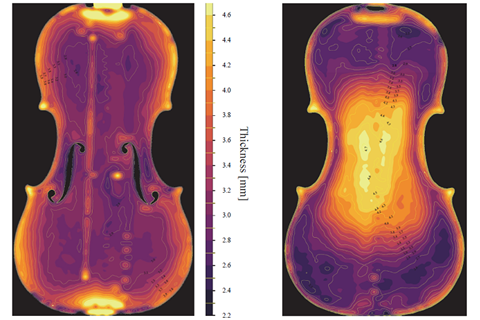 Recently published, The Strad’s latest addition to its poster collection showcases the ‘Vieuxtemps’ Guarneri ‘del Gesù’. Expert Terry Borman, who has examined the instrument many times, wrote the following in the May 2018 edition of The Strad:

We are providing thickness maps for the belly and back of this instrument. These maps were generated using hundreds of thousands of thickness measurements. Our tests, which compared calliper-derived measurements on test pieces of wood with those obtained from CT scans, show that accuracy is almost identical. The advantage of CT-derived measurements is that the potential for human error is completely removed. 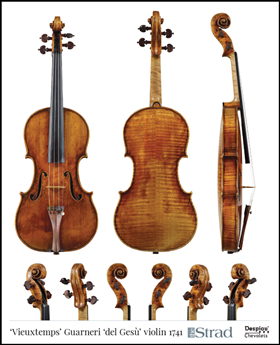 With a calliper any deviation from perfectly perpendicular to the measured point on a plate will give false readings, always thicker than real. Comparisons to Hacklinger gauge measurements are also virtually identical, although it’s difficult to repeat measurements and get the same result with this method, and the gauge has to be calibrated (something most makers don’t bother with). In the end, though, thickness measurements on their own don’t provide as much information as we’d like to believe. 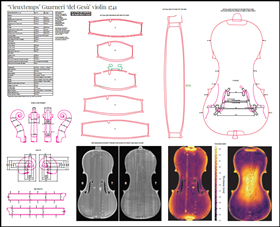 Recent research has shown that, contrary to the long-held opinion that the classical Cremonese makers had access to ‘special’ wood, this does not seem to have been the case. The notion that they benefited from wood with unique properties derived from the Little Ice Age has long since been debunked, as this would have created wood with significantly higher densities than what has been accurately measured in multiple Stradivari and GdG instruments via non-invasive CT quantitative analysis.

Once the densities and thicknesses are known, the next factor is knowing where thickness distributions occur, as this will affect the underlying concept of how a violin functions: much of the violin sound is derived from modal vibrations. The plates (at lower frequencies) vibrate creating ‘signature modes’ and knowing where these changes occur one can attempt to sculpt the modes towards a particular goal.