The Balestrieri has a fine and well-preserved covering of rich red-brown varnish, which has worn softly in the manner of Cremonese recipes

With the effective end of the great Cremonese period in the 1740s, with the deaths of Stradivari, ‘del Gesù’ and Carlo Bergonzi, Tommaso Balestrieri and G.B. Guadagnini emerged as the leading violin makers of the next, more broadly focused period of Italian lutherie. Balestrieri’s background and training in Mantua is not clearly understood, but by 1750 he was working in a robust style, influenced in form by Camillo Camilli, his predecessor in Mantua. Camilli had a particularly refined and delicate style, but Balestrieri worked in a contrastingly free manner, a little comparable to ‘del Gesù’ and the late developments of the Cremonese school, with flatter archings but a more powerful appearance. Tonally, his instruments are beautifully adapted and visually full of character.

This example from 1759 is very typical, and complete with all the mannerisms of his style, from the exaggerated windings of the scroll to the distinctively broad purfling set in a deeply worked edge. The interior working indicates a complete familiarity with Cremonese technique, and the use of an internal mould. While Balestrieri was a little inconsistent in varnish, this violin has a fine and well-preserved covering of rich red-brown colour, which has worn softly in the manner of Cremonese recipes. The materials are also of unusually good quality; Balestrieri often made use of cheap, plain cuts of local maple, but here he has used a fine single piece of well-flamed imported wood, and beautifully straight-grained mountain spruce. The violin shows Balestrieri at the height of his power and ability, and retains its original freshness and strength. 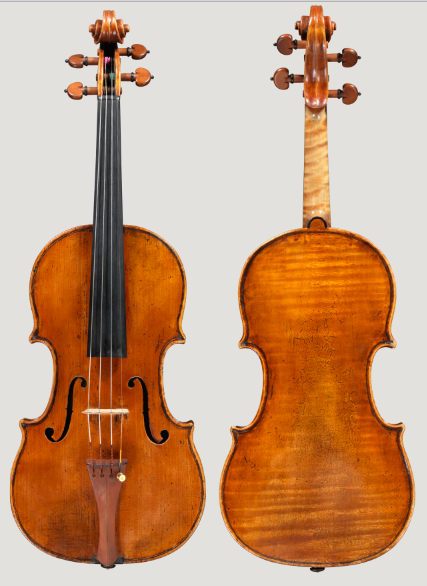