How to make gut strings the 18th-century way. From February 2011 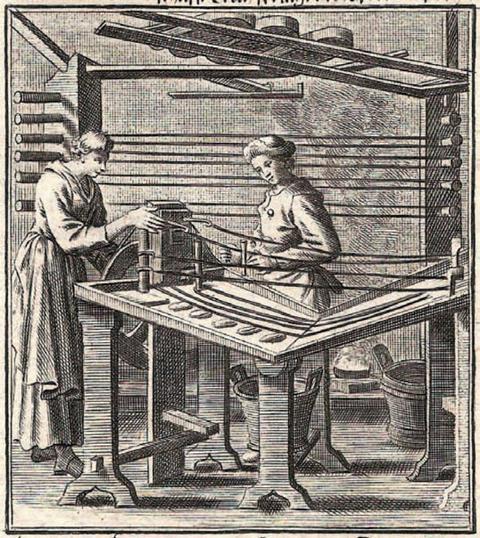 This is an extract from the article ’Gut strings: A strong stomach for strings’ that appeared in the February 2011 issue. To read the full article, click here

Although the term ‘catgut’ is commonly seen in connection with gut strings, guts from sheep and cows have most often been used, usually depending on the length and strength required in the finished product. Information about the making processes has been found in sources such as the Encyclopédie of Diderot and d’Alembert, and the business of gut string making was featured in the UK television series Worst Jobs in History.

Obtaining the gut from the animal was one of the most unpleasant aspects, but the lengthy intestines then had to be cleaned and treated with salt for preservation, which could also prove messy and smelly. The string maker would then soak the guts in water and in an alkaline solution, usually made from potash.

The chemical contents of these solutions would have an impact on the stiffness of the resulting strings, so this part of the process was crucial in determining how the violin would later sound. It would also have an impact on the colour of the final string. Following the winding and drying processes, strings were coloured, polished and finished before being fitted on to instruments for use.

William Lovelace was a string making innovator. In 1771 he took out patent 1001, in which he is described as being involved in ‘The sole making & vending of strings for violins and other musical instruments’. The details of his patent are reported as follows:

Sheep or lambs’ guts are worked and scraped, after which they are soaked in brine to give them strength and preserve their whiteness. The brine is made ‘of any fixed salt except the alimentary’ dissolved in water, to which is added a little lime and oil well mixed. After remaining in this mixture for some days, and being again scraped, ‘they may be twisted more or less together, according to the size the string is to be, & fumed with brimstone; when dry, if any little roughness remains upon them, it must be rubbed off with a nett made with small meshes of the coarsest wool, or rather of camel’s hair well oiled, & the string is finished.

He goes on to describe how to add wire to the outside of gut strings without damaging the gut, by using a series of pulleys and weights. He also indicates that ‘Oil used in the manufacture of strings & preserving them when made should be edulcorated [cleansed or improved] by putting into it lime and lead till it is as limpid and white as water.’

Read: ’You’ll slime them in and slime them out’ – song of the gut string makers