From the Archive: the ‘Louis Spohr’ Guadagnini violin 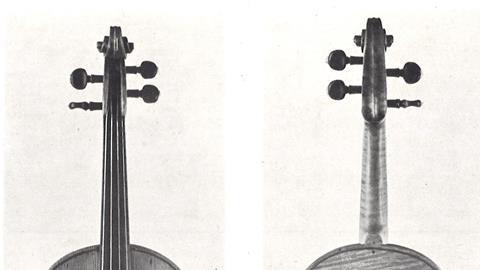 This illustration of a violin by G.B. Guadagnini was published in The Strad, July 1930. The following text is extracted from an article accompanying the photographs:

This instrument is one of the very finest specimens of the Turin work of Guadagnini in existence. It was privately possessed for many years, was formerly owned by Henry Holmes, the violinist, and is traditionally associated with the name of Louis Spohr. Henry and Alfred Holmes, both of whom are believed to have used the Guadagnini in turns, were pupils of Spohr.

The violin is in an exceptionally intact and undisturbed state, being in possession of those rare survivals, the original neck and thrice-nailed top-block.

One is able to notice in the present mature specimen a more definitely Stradivarian influence than had possessed the maker formerly. Giovanni Battista had actually modified his characteristic shape of the lower terminals of the soundholes in favour of a more classical form.

The varnish of the instrument is of a golden-orange colour. A red shade is frequently found associated with the work of Guadagnini, so the occurrence of a lighter shade upon this particularly handsomely-wooded specimen may indicate that Giovanni Battista doubted the equal suitability of the deeper tone colour for the display of the figure of very striking maple.